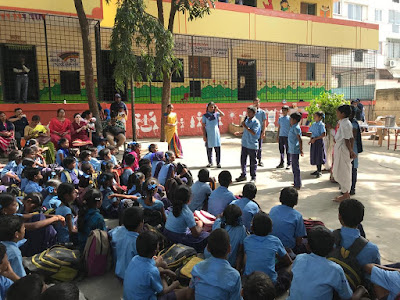 * As a part of ICARE initiative, 200 TKM employees (ICARE Champions) came together at the Government Higher Primary School, in Banashankari, Bangalore to beautify Government School
* TKM Employees engage with children through various activities including: mural painting, making clay and science models and serve food as a part of the activity
* Marking Toyota’s 10th ICARE initiative, this activity benefitted over 200 children from grades 1st to 8th at the school
* Toyota’s ICARE intervention engages its employees to contribute to a bigger social cause in the fields of Health, Education and Environment

In-line with its consistent efforts to motivate and encourage employees to partake in social causes, Toyota Kirloskar Motor (TKM), today, conducted its 10th ICARE activity at the Government Higher Primary School, in Banashankari, Bangalore. More than 200 ICARE Champions (TKM employees) came together to engage with the students through various activities including: mural painting, making of clay and science models and serving food to the students, bringing a smile to their faces and elevating their spirits. With an aim to encourage creative thinking in children and enhance quality of education, this activity benefitted more than 200 students at the school.

‘ICARE’– an employee voluntary initiative, is an effort aligned with the company’s commitment to sustained community development. This drive actively involves the employees and strives to enhance their understanding on various societal issues, contributing to address vital needs within TKM’s CSR framework. Since its launch in 2017, ICARE has grown manifold and managed to create a large impact in the society. Under ICARE, Toyota employees have earlier restored a Government School, facilitated specialized health camps, conducted recreational day with orphan children, initiated eco-campaign amongst school children through eco-painting of school premises, built playground with recycled material, installed road safety structures for smooth traffic flow, took part in the restoration and maintenance of Bannerghatta National Park and extended support to families affected by cyclone in Odisha.

Mr. Sameer Sudhindra Desai, ICARE Champion, participating in the cause said, “I am very happy to participate in this activity as it gives me an opportunity to make a meaningful contribution to the lives of these bright young minds. I am thankful to TKM for constantly motivating us to serve the community and work towards the betterment of the society. Such activities not only benefit the society but also help us become better human beings.”

Mr D Pradeep Kumar, another volunteer under ICARE Program said, “We are thankful that the company has created platform for their employees to come together and make a difference to the community. Being an ICARE champion, has given me a different perspective about life. I have been participating in all the ICARE initiatives, since its launch. I personally feel elated by contributing to the society and as well as networking with my peers. We are happy to be part of ICARE success story”

Present at the activity, Mr. Naveen Soni, Vice President, Toyota Kirloskar Motor said, “We have always believed in putting our collaborative efforts to bring happiness in the lives of the community members and achieve long-term sustainability. Through ICARE, we intend to inspire our employees to be actively involved in noble causes and empower them to be the change creators in the society helping them grow as a responsible citizen. We believe that focusing on the development of children and providing adequate facilities will help them become change makers of tomorrow. We work with the local authorities to identify critical needs of the children and design initiatives to enhance their overall learning experience as we believe in providing quality education at the grass root-level. Through this activity, we intend to bring down the school drop-out rate by creating a wholesome learning experience for the children at the school. We will continue focusing our efforts to issues that need our intervention and strive to make a key contribution that will empower the community members.”

Toyota Kirloskar Motor, over the years, has initiated several sustainable projects to accelerate access to quality education in the country. The company has reconstructed 9 Government schools, in Ramnagara and Mysore District,