Tata Motors Candidate Honored with the Medallion of Excellence at the WorldSkills Competition in Kazan, Russia 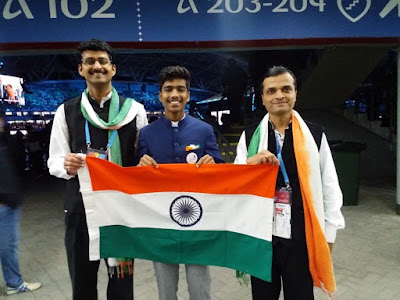 Mr. Tushar Phadatare, the Tata Motors candidate at the 2019 edition of the prestigious WorldSkills Competition, was awarded the Medallion of Excellence at the world championships for vocational skills, held in Kazan, Russia. This medallion was awarded to Tushar in the recently contested Automobile Technology category of the competition. A total of 35 countries participated in this category of skills. Tushar finished with an exceptional score of 710 points and secured the 15th position, placing India ahead of countries such as Belgium, the United Kingdom, New Zealand, Singapore and Spain. For Tata Motors it was a proud moment, as it was the only Indian manufacturer to participate in the Automobile Technology category this year.

Commenting on this achievement, Mr. Subhajit Roy, Senior General Manager & Head - Customer Care (Domestic and International Business), Passenger Vehicle Business Unit (PVBU), Tata Motors said, “This is a very proud moment for all of us at Tata Motors. This achievement is admirable and we are delighted that the efforts of both Tushar and the Tata Motors team have resulted in making this possible. Due to his exemplary performance, Tushar has helped improve India’s position in the WorldSkills Competition by one place, and our rank by three spots, as compared to the previous edition in 2017.”

WorldSkills International awards Medallions of Excellence to those candidates, whose performance exceeds the global industry benchmark in a particular category. The results are derived from a WorldSkills Scale that uses a statistical formula and evaluates all participating countries in a particular skill. Tushar has completed his Full Term Apprentice (FTA) course at Tata Motors’ plant in Pune. To be eligible for representing India at WorldSkills, Tushar qualified and secured the winning position in the district, state and regional level rounds of IndiaSkills, followed by a gold medal in the final round of the competition.
Posted by editor-manu-sharma at 5:25 PM