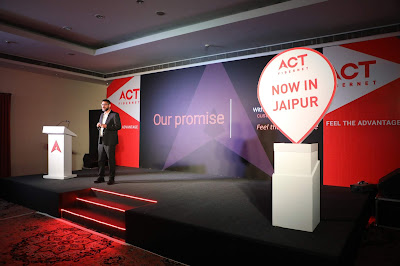 Speaking on the launch Bala Malladi, CEO, Atria Convergence Technologies Ltd. said, “Jaipur being one of the fastest-growing and most progressive cities, with its young population, requires cutting edge & futuristic internet technology. We are happy to launch our services in the city. We believe with our pioneering speed and next generation fiber broadband technology, we will help our customers feel the advantage of speed and explore new possibilities in the virtual space. Our goal is to enable them to have an enhanced home internet broadband experience with streaming, gaming, video calling, and much more in real time with uninterrupted connectivity”.

In India 80% of data consumption happens through fixed line broadband, in homes, offices, schools and other enterprises. According to recent reports, the number of broadband subscribers increased by 6.5 million between November 2018 and December 2018 alone. With the government’s constant and fervent efforts to internet-enabled cities, initiatives such as ACT Fibernet’s will boost the country’s digital adoption.
Posted by editor-manu-sharma at 8:42 PM