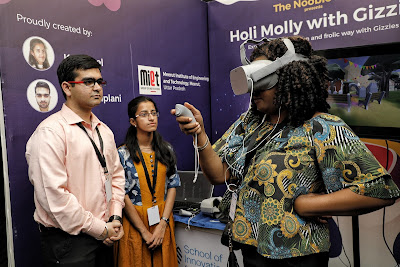 In an initiative co-organised by Facebook and SV.CO, involving college students who want to a make a career in new-age technologies, 21 young developers showcased their products and skills, as part of the Facebook School of Innovation VR Demo Day on Saturday.

The demonstrations, which were made to members of the Facebook team and an industry expert, concluded with the announcement of the National VR Student Developer of India, with team VR Bro’s from Rajasthan walking away with a prize for their VR Application on "Bails Down".

The VR Application by Mayank Bhutani and Koustubh Gupta from BITS Pilani institute focused on creating an immersive VR experience of a Street Cricket player becoming a successful and famous cricketer. The other participating teams are from 7 states.

Prior to their demonstrations, the teams participated in a 20-week program that included online and in-person learning sessions to develop their ideas, build a low and high-fidelity prototype and finally launch the product to customers. The developer training was conducted under the mentorship of five professionals, who are experts in the field of emerging technologies.

The purpose of the VR Programme, built in collaboration with industry partners like Scapic and Unity, will help to develop skill sets that are required to transform Virtual Reality ideas into next-generation, globally marketable products and services.

Satyajeet Singh, Head of Platform Partnerships for India and South Asia, Facebook, said, “With disruption being the new norm driving the Indian technology ecosystem today, we want to equip our budding entrepreneurs with the latest in emerging technologies and enable them to become problem solvers of tomorrow. The Facebook School of Innovation and the VR Day Program seeks to encourage the spirit of entrepreneurship in Indian students and impart them with relevant skill sets, to bridge the gap between academia and industry requirements.”

Speaking about the program, Suma Sundararajan, Programme Head and Chief Operating Officer of SV.CO, said, “Through the School of Innovation, we now have students who have transformed themselves from being enthusiasts in an emerging technology to become industry-ready, professional VR developers who are capable of building stand-alone VR applications. Students now have a choice to use their skills to take a job, build their own startup or go for masters in areas like Gaming or Machine Vision.”

During the course of the training program, the student developers engaged with the global best practices through multiple online sessions with global Virtual Reality experts. The students were given access to the Oculus GO VR Devices to build their applications and product prototypes.

These technological innovations were demonstrated at the School of Innovation VR Day, which was attended by an array of vice-chancellors, members from the state startup missions, fellow students and parents.

Of the pool of 21 participants showcasing their work on the platform, the shortlisting process was conducted via a series of workshops conducted by Facebook and SV.CO across India, which saw a participation of over 5,000 students, while the remaining 18 were selected from 1,191 applications received from across India.
Posted by editor-manu-sharma at 5:51 PM