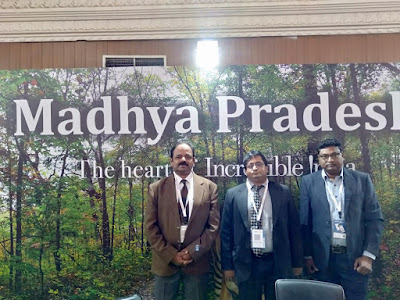 Being one of the forerunners among the economically rising states of incredible India, Madhya Pradesh Tourism Board has participated  in TTF (Travel & Tourism Fair) held at Palace Grounds, Bengaluru from Madhya Pradesh is a state that reflects the true cultural heritage of Incredible India. Through the amalgamation of various communities and castes, the folklore and historical monuments makes Madhya Pradesh one of the most sought after tourist destination.

TTF Travel & Tourism Fair held in Bangalore is India's leading exhibition for the travel and tourism industry. It provides an annual opportunity for organizations from India and abroad to showcase their products and services. The trade fair was visited by India’s leading tour-operators, travel agents and hoteliers, airlines and media professionals from different corners of the country. These Buyers and Media representatives visited Madhya Pradesh Tourism stall also and exchanged their views and opinions on Madhya Pradesh with the officials at the stall.

As quoted by the officials of Madhya Pradesh Tourism Board, “Madhya Pradesh is such an extremely diverse state serving plethora of beautiful historic sites to exotic places. It is not only home to some of the unique wildlife in the country but warm-hearted people. It has become a holiday spot for celebrities, businesses, friends, individuals and families.With the rich history and commendable efforts of Archeology Department today Madhya Pradesh has become a preferred destination for solo and family travelers who want to move away from the hustle bustle of city’s abundance. Participating in TTF 2019 has provided MP tourism with an opportunity to display its magnificence as well as educate consumers on the latest offerings and world class tourism facilities provided by the state. ”

From being the state with the largest forest area to wildlife hotspots with 10 National parks & 25 Wildlife sanctuaries, 3 UNESCO World Heritage Sites; Madhya Pradesh has a plethora of nature, culture, heritage and activities available for every age group of tourist. Apart from the diversity, the annual cultural Events including the Khajuraho Dance festival, MalwaUtsav, Tansen Festival, Allauddin Music fest are simply the ideal trifect a showcasing best of Indian traditions. Besides these, “Madhya Pradesh Travel Mart (MPTM)” and “Jal Mahotsav” are annual events which are very popular amongst the trade people and tourists from various regions in the country

In order to create awareness among the native population and tourists regarding cultural and natural heritage in the state, the “Heritage run” activity is being organized at various tourist destination. Next runs are at 17th February on Pachmarhi, 24th February on Khajuraho, Gwalior on 10th March and Pench on 17th March and so on. Also, next international event in Madhya Pradesh is Khajuraho Dance festival from 20th to 26th February. The forthcoming major exhibitions in which the Madhya Pradesh Tourism Board will be participating to carry on with trade networking are IITE in Bhubaneshwar from 15th to 17th MarchandGITB in Jaipur from 28th – 30th April, 2019.
Posted by editor-manu-sharma at 9:12 AM