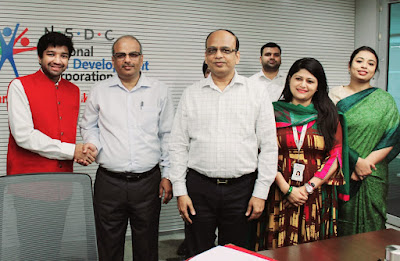 In an effort to equip India’s youth with relevant skills of the 21st century and increase employment opportunities through upskilling programs, the National Skill Development Corporation (NSDC), working under the aegis of the Ministry of Skill Development & Entrepreneurship (MSDE), has announced its partnership with Podar Eduspace — a fast-growing education technology organization focused on student programs ranging from research, volunteering, and skill development to contribute to India’s growth story.

As part of the collaboration, Podar Eduspace will be empanelled as a skilling partner for NSDC and will provide its WorkEx Bootcamp program and 21st century Digital Skills Bootcamp program to bridge the gap between industry and education in colleges, increase employment, and help in upskilling candidates across India, mainly in corporates and universities. The partnership agreement was signed by Mr. Sanjeeva Singh, Executive Vice President, CSR & Skill Development Financing, NSDC, and Mr. Vedant Podar, CEO, Podar Eduspace.

Through Podar Eduspace’s upskilling program, the WorkEx Bootcamp, which focuses on providing 21st century relevant skills, their students can have access to a 4-module program which includes tracks in collaboration with Harvard Business School Online and Podar Enterprises. The courses will focus on industry-level skills like Data Analytics, Business Strategy and Data Science, Cryptocurrency, and Metaverse. The candidates will also get access to guaranteed virtual research internships to apply their learning and pick up industry-relevant skills.

The course is a 4-certificate programme which will be co-branded by NSDC and Podar Eduspace.

Lauding the partnership, Mr. Sanjeeva Singh, Executive Vice President, CSR & Skill Development Financing, NSDC said that new-ages skill and practical knowledge have become indispensable, especially as India braces for Industrial Revolution 4.0. To ensure that India becomes a USD 5 trillion economy and a global powerhouse, all the stakeholders need to come together to create an environment which will skill, reskill and upskill India’s youth for the jobs of the future. He also said that with NSDC joining hands with Podar Eduspace, the focus will shift towards training students in advanced skills and transform them into pillars on which the edifice of an Aatmanirbhar Bharat will rest.

Commenting on the collaboration, Mr. Vedant Podar, CEO, Podar Eduspace added that amid the current geopolitical churn, the demand for digital skills is highly needed for tech-enabled jobs across all the platforms. Through the partnership, they aspire to impact livesacross India and create positive change which will boost our nation’s economic growth, and contribute to the cause of India becoming the skill capital of the world. To keep up with the growing economy, Podar Eduspace is deeply invested in upskilling youngsters in India so that they can shoulder the demand of the volatile domestic as well as the global markets. This partnership is a vital strong step in that direction and will play a pivotal part in equipping students with skills that they will need to succeed in this digital economy.

National Skill Development Corporation (NSDC), a nodal skill development agency, working under the Ministry of Skill Development & Entrepreneurship (MSDE), Government of India, is a unique Public Private Partnership (PPP) that aims to catalyse the creation of a large and quality vocational training ecosystem in India. Since inception in 2010, NSDC has trained over 3 crore people through its collaboration with 600+ training partners and over 10,000 training centres spread across 600+ districts in the country. NSDC has established 37 Sector Skill Councils (SSCs) and implements the Government’s flagship skill development schemes such as Pradhan Mantri Kaushal Vikas Yojana (PMKVY), National Apprenticeship Promotion Scheme (NAPS), among others. NSDC also funds enterprises, companies and organisations that provide skill training. The organisation enables private-sector capacity building in skill development by offering concessional loans, other innovative financial products, and strategic partnerships.

Podar Eduspace is the educational pillar of Podar Enterprise focusing on student programmes ranging from research, volunteering, skill development & advisory to educational institutes. It also marks as a foray into EdTech and leverages the online medium to reach people in India, and worldwide. Their offerings seek to equip students with practical knowledge and valuable skills to combat the challenges of the 21st century.

The WorkEx Bootcamp (launched by Podar Eduspace) is a programme that integrates Harvard Business School Online, and Podar Enterprise courses to inculcate interdisciplinary skills to boost employability and knowledge.