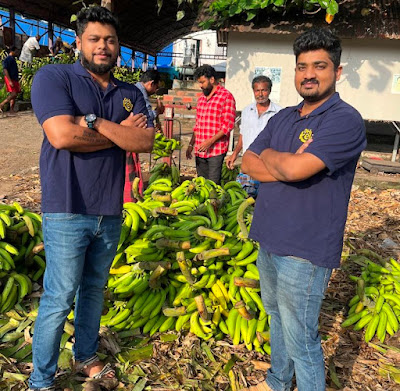 A Kerala-based agro business startup has launched a pioneering venture to build India’s first full-stack supply chain connecting banana cultivators, traders and exporters on a single platform, tapping into the country’s surging exports of the nutrient-rich fruit with the potential for a strong global brand for its value added products.

Greenikk has built Enablement Centres (EC) in the major banana producing agri-belts, in Kerala, Tamil Nadu and Karnataka. These ECs provide the farmers with required supports such as finance, seeds, crop advisory, insurance coverage, agri inputs, including weather tips, and market connect, covering the entire gamut of production and marketing both inside the country and outside. Similar ECs are planned in other south Indian states of Andhra Pradesh and Telangana and further scaling across the whole of India.

Also, the platform, an innovative and promising initiative, will help farmers convert stems of the post-harvest banana plants into natural fibre and re-purpose the other leftovers as manure or poultry feed.

Noting that almost 20 crore post-harvest plant stems are being burnt or wasted every year, the Greenikk promoters said their aim is to ensure supplementary income for farmers through value addition of the wasted materials, besides helping curb air pollution.

“While venturing into this uncharted territory, the question that we often confronted was what made us to choose bananas, of all fruits available in the country. Having worked closely with some banana farmers, dealers, and buyers, we realised that it has the maximum potential among the fruits grown in India, if linked to a strong and reliable value chain that would scale up exports,” said Fariq and Previn, who were earlier promoters of an East Africa-based IT software startup.

India accounts for around 25 per cent of the world’s banana production, and the country’s exports of this fruit have grown eight-fold in the last nine years.

The National Research Centre for Banana (NRCB) has reported that India produced 32.6 million tons of bananas in 2020 with a land area of 9.6 lakh hectares under cultivation.  There are more than 10 million stakeholders too. The domestic market size is pegged at around $18 billion.

“Though countries like USA and the UK have just one-third of India’s production, they own most of the popular global brands of value-added banana products. India, with a huge capacity for banana exports, is yet to capture the huge global market for banana-based snacks, health and nutrient supplements. What we are looking at is to place Indian banana on a strong supply chain with global reach, which will ultimately benefit our farmers” the Greenikk founders pointed out.

“The shortcomings in the country’s agro system have prevented the realisation of the enormous export potential of bananas. We have launched this technology-driven platform to remove the inefficiencies in the banana value chain besides addressing the problems of various stakeholders,” they said.

Fariq and Previn, driven by the passion to promote green and clean agro-based products that would replace plastic, successfully came up with the idea of a sustainable alternative to plastic and paper straws – papaya straws made out of waste petioles. This product won them an award at the TATA Social Enterprise Challenge in January 2020, on becoming the first team from Kerala to reach the finals of the challenge.

During the pandemic-induced lockdown, they launched a truck store (Farmy) that delivered fruits and vegetables, directly sourced from farms, at the doorsteps of apartments and various housing societies in the city.

Posted by editor-manu-sharma at 3:44 PM