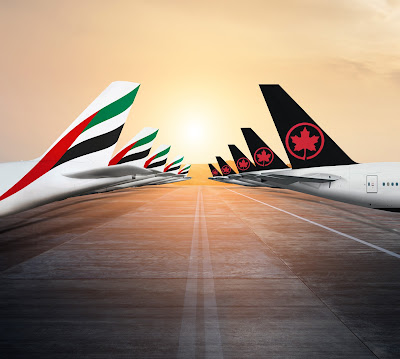 Emirates and Air Canada today announced the signing of a strategic partnership agreement that will create more options for customers when travelling on the carriers’ networks while also enhancing the customer experience throughout the journey.

Emirates and Air Canada intend to establish a codeshare relationship later in 2022 that will offer enhanced consumer travel choices for Air Canada customers to travel to the United Arab Emirates and to destinations beyond Dubai. Emirates customers will also enjoy an enhanced travel experience when travelling to Toronto or to key destinations across the Air Canada network. Customers will have the ability to book connecting travel between both airlines’ networks with the ease of a single ticket, seamless connectivity at the carriers’ respective global hubs and baggage transfers to their final destinations.

Sir Tim Clark, President Emirates Airline said: “This is a significant partnership that will enable our customers access to even more destinations in Canada and the Americas, via our Toronto and US gateways. It also opens up many new route combinations for travelers across Emirates’ and Air Canada’s extensive networks in the Americas, the Middle East, Africa and Asia. We are pleased to partner with Air Canada, one of North America’s most established airlines and Canada’s flag carrier and we look forward to jointly progressing on various areas to provide even better customer flight choices and experiences.”

"As we continue pursuing our strategy of expanding our global reach in response to growing opportunities in VFR markets (Visit Friends and Relatives) that serve Canada’s large multicultural communities, we are very pleased to form a strategic partnership with Emirates, a highly respected flag carrier of the United Arab Emirates with a hub in the vibrant city of Dubai. This strategic agreement will create network synergies, and Air Canada customers will have additional, convenient options when travelling between Canada and the United Arab Emirates as well as destinations beyond Dubai" said Michael Rousseau, President and Chief Executive Officer at Air Canada. "We look forward to introducing Air Canada codeshare service on key Emirates flights, as well as adding the EK code on select Air Canada flights, and welcoming Emirates customers on our services later this year."

To further enhance the customer experience, the carriers will also establish reciprocal frequent flyer benefits and reciprocal lounge access for qualifying customers. Further details of the partnership and specific codeshare routes will be announced when finalized and will be subject to regulatory approvals and final documentation.

Air Canada is Canada's largest airline, the country’s flag carrier and a founding member of Star Alliance, the world's most comprehensive air transportation network celebrating its 25th anniversary in 2022. Air Canada provides scheduled passenger service directly to 51 airports in Canada, 51 in the United States and 86 internationally. It is the only international network carrier in North America to receive a Four-Star ranking from Skytrax, which in 2021 gave Air Canada awards for the Best Airline Staff in North America, Best Airline Staff in Canada, Best Business Class Lounge in North America, and an excellence award for managing COVID-19. Through its leading travel loyalty Aeroplan program, Air Canada offers the ability to earn or redeem points on the world’s largest airline partner network of 45 airlines, plus through an extensive range of merchandise, hotel and car rental rewards. Its freight division, Air Canada Cargo, provides air freight lift and connectivity to hundreds of destinations across six continents using Air Canada’s passenger flights and cargo-only flights with its fleet of Boeing 767-300 freighters. Air Canada has committed to a net zero emissions goal from all global operations by 2050.

Emirates is the award-winning global airline that serves over 130 cities on six continents through its efficient hub in Dubai. It operates the world’s largest fleet of modern wide-body Airbus A380 and Boeing 777 aircraft that are fitted out with the latest comforts in the sky. Emirates has won numerous accolades for excellence across its operations, including being named World Class Airline at The APEX Official Airline Ratings™ awards, which stands at the pinnacle of all APEX Passenger Choice awards, and being rated Five Star Airline by APEX.

Posted by editor-manu-sharma at 6:19 PM