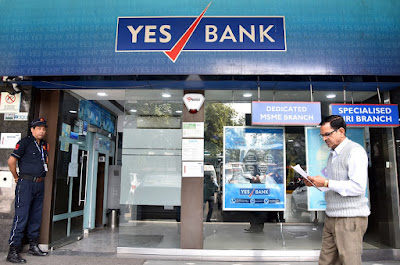 Commenting on the occasion of the Board’s decision on forming the alternate Board, the Chairman of the Board, Mr. Sunil Mehta said “YES Bank today accomplishes a significant milestone of coming out of the Reconstruction Scheme by initiating the process of formation of the alternate Board. On this occasion, I wish to compliment and thank my colleagues on the Board, the Reserve Bank of India, Government of India, State Bank of India and all other investors, Bank’s customers and importantly the 24,000 plus highly dedicated employees of YES Bank for having achieved a historic turnaround of one of the largest private sector banks of this country.

It has been a fascinating experience and truly a privilege to lead the Board during this very difficult period and achieve very distinct milestones over the course of more than 2 years. My special gratitude to Mr. Mahesh Krishnamurti and Mr. Atul Bheda who will be demitting office along with me on formation of the alternate Board. The most satisfying and fulfilling outcome for us has been the renewed business momentum and trust we have regained with our customers, employees, regulators, investors and all our stakeholders. As demonstrated over the last several quarters, the Bank is now ready to grow profitably and sustainably, on behalf of the Board, I assure all our stakeholders that the Bank has built a strong ethos of integrity, trust and transparency which shall remain uncompromised. The Bank now is fully ready to achieve its long term growth trajectory under the direction of the alternate Board being formed.“

a. Four Directors including MD&CEO and Chairman as mentioned in the Reconstruction Scheme:

- Mr. Sunil Mehta, Chairman of the Board

b. Two SBI nominee directors who are the officers of SBI

• Further, the Reconstruction Scheme stated that the members of the Board, other than the Additional Directors appointed by RBI, shall continue in office for a period of one year, or until an alternate Board is constituted

• Since the implementation of the Reconstruction Scheme, the Bank has undertaken multiple transformational initiatives that have helped the Bank to resurrect and rebuild its foundation and now remains on course to achieve its growth and profitability objectives. The Bank also expanded the Board in 2021. Some of the key milestones include:

a. FY22 was a first full year profit for the Bank at INR 1,066 Crores after two successive years of heavy losses in FY20 and FY21

f. Focus has moved from consolidation of the balance-sheet to growth. In FY22, Loan Book grew by ~9% with Gross Disbursements of ~INR 70,000 Crores across all segments.

g. Bank has undertaken multiple initiatives to review and make necessary changes to it’s Governance Frameworks and processes with a key focus on the Credit underwriting policies and practices.

h. Maintained leadership in Digital Payments with highest market share in UPI. 1 of every 3rd digital transaction is process by YES Bank infrastructure.

• On the back of the above and basis recommendation received from SBI the largest shareholder of the Bank, the Board has now initiated the process of forming the alternate Board. As a first step, the Board has recommended to the Shareholders the appointment of Directors as recommended by SBI on the alternate Board. The Shareholders’ meeting (AGM) is scheduled on Friday, July 15, 2022 to consider the relevant resolutions.

Pursuant to SBI’s recommendation, the composition of the proposed alternate Board subject to shareholders approval would be as under:

• Mr. Sunil Mehta, Chairman, Mr. Mahesh Krishnamurti and Mr. Atul Bheda – Board members as appointed under the Notification dated March 13, 2020 of the Reconstruction Scheme, would be handing over charge to the alternate Board having overseen the significant turnaround of the Bank in record time and having achieved the primary purpose for which they were mandated per the YES Bank Reconstruction Scheme, 2020.

The Bank’s largest shareholder, State Bank of India, has proposed Mr. Prashant Kumar’s candidature for the position of MD&CEO of the Bank for a period of three years, which will be subject to approval of the alternate Board, Reserve Bank of India and the Shareholders.

YES BANK operates its Investment banking, Merchant banking & Brokerage businesses through YES SECURITIES, a wholly owned subsidiary of the Bank. Headquartered in Mumbai, it has a pan-India presence including an IBU at GIFT City, and a Representative Office in Abu Dhabi.

For more information, please visit the Bank's website at http://www.yesbank.in/