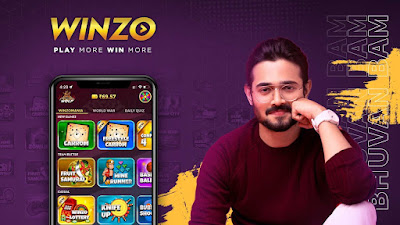 Bharat’s leading Vernacular Online Gaming Giant, WinZO announces Digital Superstar and Filmfare awardee- Bhuvan Bam as its Brand Ambassador. As a part of this collaboration, WinZO and ‘BB’ will be co-creating culturally relevant and relatable content catering to even those hailing from the most isolated hamlets of the country. The YouTube sensation enjoys a massive followership of 25+ Million subscribers, recording as many as 4 billion views, and is renowned for being an exceptional comedian, actor, writer, singer, and lyricist. Both WinZO and Bhuvan have set multiple examples for generations to follow during the course of their illustrious journeys to the top and seek to take meaningful and concrete steps towards establishing Bharat as the next ‘Gaming Superpower’.

The advent, growth, and propagation of ‘social gaming’, which involves the evolution of online games into being used as a medium to connect with the world outside, spearheaded by WinZO which has garnered a mammoth user base of 75 + Million users in just 3 years has opened up innumerable new avenues for India’s gaming community. Online gaming going beyond the conventional stereotypes has emerged as a viable interactive space that has surpassed mainstream entertainment verticals like movies and music. Industry leaders like WinZO collaborating with a superstar in Bhuvan Bam who has exhibited his knack of connecting with the masses with utmost ease time and time again. This is bound to elevate the engagement and growth of the community as well as the industry to a whole new level.

A little known but highly vital fact is that India is the largest market for mobile games, contributing to nearly 40% of the worldwide downloads and this speaks volumes about the untapped potential of its social gaming community. As a part of this brand collaboration, “BB” will partner with WinZO to produce unique content for his massive user base and beyond, that resonates with millions, thereby tapping into the potential on offer. His diverse skill set and ability to garner massive traction truly complements WinZO’s reach and its diversified offerings across 6+ formats in 12 vernacular languages. WinZO’s vision is to develop games in Bharat for Bharat and beyond and this collaboration is bound to act as the trump card in the process of making this a reality by educating and attracting new enthusiasts, developers and talented professionals.

Commenting on the association, Saumya Singh Rathore, Co-founder, WinZO said, “Bhuvan is one of the biggest digital stars and best entertainers of our age. He portrays over 20 interesting characters like Titu Mama, Bancho, Masterji, etc. and each of these characters constitute a unique audience and fandom. This is fairly similar to WinZO's unique value of having a personalized offering of 100+ games on a single platform. On a lighter note, in Bhuvan we have got not one but 20 brand ambassadors. This collaboration is a match made in heaven.”

“Online gaming has become an essential element of India’s ever-expanding industries and WinZO has created varied advanced realms for the community in a short span of time. Their profound understanding of the users and providing them quite what they want has helped WinZO garner this massive traction and reach. They have a unique and distinguished platform and I’m elated to join this energetic group to develop some exciting content together and connect with our users”, added Bhuvan Bam.

WinZO is the largest social gaming and entertainment platform in India. Launched in early 2018, the Company partners with third party developers to host games on their Android app, where users can enjoy personalized multiplayer gameplay experiences. The platform is available in 12 languages such as English, Hindi, Gujarati, Marathi, Bengali, and Bhojpuri, with over 75 million registered users. The WinZO platform facilitates over 2.5 billion micro-transactions per month across a portfolio of 100+ games. WinZO is focused on building an enthusiastic community of gamers and gaming influencers in Tier II to IV cities in India. The Company envisions a future where the WinZO platform can deliver a culturally relevant and enjoyable experience in the Indian gaming ecosystem, monetized through a unique micro-transaction model.

Posted by editor-manu-sharma at 8:12 PM