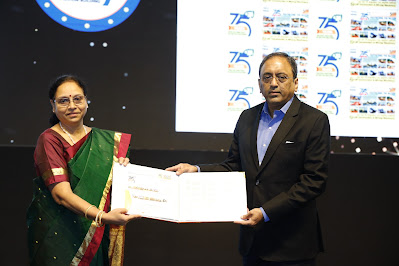 Addressing the gathering, Mr. Subrahmanyan said, “L&T has a legacy of pioneering critical equipment required for nation-building and is at the forefront of continuous enhancement of engineering design and manufacturing capabilities. We are delighted that our Construction and Mining Machinery Business has been fulfilling the needs of the mining and construction sectors with high quality equipment and excellent service for the last 75 years.”

He said L&T’s Construction & Mining Machinery Business had introduced the hydraulic excavator technology to India and contributed significantly towards its infrastructure development. As an engineering conglomerate, L&T has been instrumental in partnering with the nation and bringing into India cutting-edge technologies from across the world that has enabled in accelerating the growth of the nation.

The business has supplied over 60,000 units of various equipment in India during its 75 years association with the Construction and Mining Industry. These machines have been used to create landmarks of exceptional design and have significantly contributed to the growing infrastructure of the nation.

In her address, CPMG Mrs. Sharada Sampath appreciated the efforts of L&T as the frontline engineering organization committed to building India through involvement in critical projects. She congratulated the L&T senior management for its success and extended best wishes for future initiatives.

Speaking on the occasion, Mr. Arvind K Garg said, “As L&T-ites, we are honoured to have this commemorative stamp issued on our 75th anniversary and are thankful to the Department of Posts for this acknowledgment. He said L&T has been leading the way to fulfilling the mission of Atmanirbhar Bharat with manufacture and supply of road machinery such as Vibratory Compactors and Wheel Loaders which are deployed for roads and highways development.  We reaffirm our commitment to develop and launch cost-effective technologies for Indian customers.”

L&T utilized its deep knowledge and experience gained since 1945 and developed its own ‘Make in India’ road machinery comprising of Vibratory Compactors and Wheel Loaders. These indigenously designed and manufactured machines are now aiding road construction and highway development and enabling L&T move towards fulfilling the national mission of ‘Aatmanirbhar Bharat’.

The commemorative stamp released on the occasion features various models of earthmoving equipment introduced by L&T in the last seven decades in the Indian market. During the event, a special cover was also released.

Larsen & Toubro is an Indian multinational engaged in EPC Projects, Hi-Tech Manufacturing and Services. It operates in over 50 countries worldwide. A strong, customer–focused approach and the constant quest for top-class quality have enabled L&T to attain and sustain leadership in its major lines of business for eight decades.

Posted by editor-manu-sharma at 1:12 PM