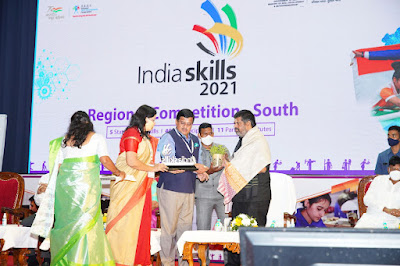 After a great display of skills, talent, passion and determination, winners from Karnataka received 15 Gold and 14 Silver medals and secured second position in the IndiaSkills 2021 Regional Competition- Southern Zone. Overall, 124 participants today were declared winners of the Southern chapter of IndiaSkills 2021. Shri Muttamsetti Srinivasa Rao, Hon’ble Minister of Tourism, Culture & Youth Advancement, Government of Andhra Pradesh felicitated the winners at the closing ceremony held in Visakhapatnam, Andhra Pradesh. Of the total winners, 62 were awarded Gold medals with a cash prize of INR 21,000 and 62 received Silver medals along with INR 11,000.

Participants from other states also joined the competition through Wild Card Entry from Track 2 (in states where the competition was not held) and Track 3 (candidates nominated by Industry and corporates). 22 medals were awarded in the Wild Card category.

The opening and closing ceremonies of the IndiaSkills 2021 South Regional Competition were conducted at Andhra University Convention Centre. The winners of all four Regional Competitions (East, West, North and South) will get an opportunity to exhibit their skills at IndiaSkills Nationals to be held in for January 2022. IndiaSkills Nationals gold and silver medalists in each skill will represent the country at the WorldSkills Competition to be held in Shanghai, China (October 2022).

Col. Arun Chandel, Senior Head, WorldSkills India said, “Witnessing the performance of our very talented youth during the last two days of IndiaSkills Regional Competition 2021, South, it has been proven that their abilities can truly define their future. On behalf of NSDC, I would like to extend my gratitude towards the Ministry of Skill Development & Entrepreneurship, the Government of Andhra Pradesh, APSSDC, all state Governments, Industry Partners, Sector Skill Councils and our partners for their collaboration and inspiring the youth to develop a passion for skills. I congratulate all the winners and the participants for showcasing excellence through this competition. It is my belief that IndiaSkills and WorldSkills will provide recognition to our skilled youth around the globe.”

During these competitions, participants get multi-level industry training through boot camps and programs such as project-based training, industry and corporate training, exposure visits to industries, mind coaching, and personality development. NSDC, through its Sector Skill Councils (SSCs) and Partner Institutes, train the candidates for the competitions and for future endeavors as well.

NSDC has been leading India’s participation at the WorldSkills Competitions. WorldSkills, the gold standard of skill excellence, is a biennial event that records participation from over 80 nations. Skilled and talented youth from across the world compete on the global platform in multiple skills. In the previous edition of WorldSkills held in Kazan, Russia in 2019, India ranked 13 of 63 participating countries. More than 1,350 candidates participated in 56 skills, and team India gave its best-ever performance by winning four medals—one gold, one silver, two bronze medals—along with 15 Medallions of Excellence.

Posted by editor-manu-sharma at 2:08 PM