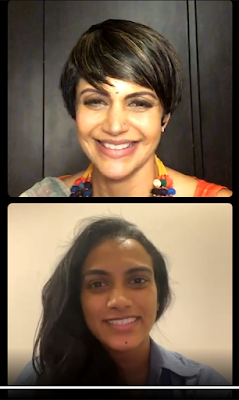 Bank of Baroda celebrated National Sports Day by organising an AMA session #SmashItWithSindhu2 with 2-time Olympic Medallist PV Sindhu and renowned sports commentator Mandira Bedi. The session has been viewed by more than 65,000 fans of the shuttler. Fans asked questions on various aspects of Sindhu’s journey. Bank of Baroda has been associated with the athlete for almost 5 years now, a relationship which started even before she won at Rio Olympic.

On winning her second Olympic medal, Sindhu said, “Winning back-to-back medals at the Olympics is definitely a dream come true.” During the conversation, Sindhu highlighted that India is getting much better in sports year after year and the future looks very promising.

In a rapid-fire conversation with Mandira Bedi, Sindhu revealed her personality traits being very jovial and sensitive unlike being aggressive on the court. When asked about the movie on PV Sindhu, the shuttler expressed Deepika Padukone as the best fit to play her character as the actor is a badminton player as well.

When a fan asked Sindhu, what does she like to do when she is not training, she replied that she loves dressing up and like a true millennial uses bob World extensively for its convenience and attractive offers. As a stressbuster, Sindhu loves travelling and with bob World services she is able to plan her vacation by herself.

Sindhu doesn’t spend much time on social media – she even lost a bet to Mandira on guessing the number of her followers. In the sportsman spirit the Olympian agreed to transact the bet amount via Bank of Baroda’s recently launched app – bob World, which she described as super-fast and the right partner for all her banking needs like Save, Invest, Borrow and Shop.

Sindhu stressed upon the importance of encouraging young kids to explore sports. She added that parents must support and inspire their kids to take their passion for sports seriously.

About Bank of Baroda:

Bank of Baroda (“The Bank”) established on 20th July 1908 is a State-owned banking and financial services organisation, headquartered in Vadodara (earlier known as Baroda) in Gujarat, India.

Posted by editor-manu-sharma at 12:17 PM