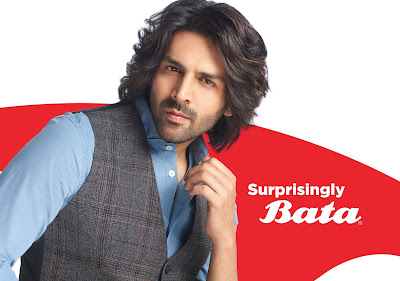 The young actor is currently one of the most sought after and celebrated actors in the industry. Kartik has a great knack for fashion and is regarded a trend-setter. Owing to his stature as a youth icon, Kartik has amassed a huge fan following in a short span of time.

The association will begin with the launch of new campaign by Bata. Kartik will be seen in a series of advertisements across television, digital and other mediums.

Mr. Anand Narang, VP-Marketing, Bata India Limited said: “We are happy to have Kartik Aaryan on board as our new ambassador. At Bata, we have been transforming the brand by making our stores more inviting & changing our portfolio to have more casuals, sneaker & fashion styles to attract more millennials. Kartik with his positive energy and easy-going approach relates very well with the youth today. Our association with Kartik will help in further strengthening our connection with the youth and bringing to fore our younger brands like Bata Red Label, North Star, Power & Hush Puppies.”

On associating with Bata India, Kartik Aaryan said: “I am delighted to be associated with an iconic brand like Bata. As a child I remember Bata being the ultimate choice for footwear for everyone and the brand still has the same impact. It has always remained trendy and relevant to its time. I am impressed with the way Bata has revamped its image to emerge as a youth-centric, fashion-forward brand. I am excited to collaborate with Bata and create something special together.”

Bata has held a unique place in the hearts of Indians for more than 85 years. Probably the only footwear brand that offers footwear and accessories for the entire family, Bata has redefined the modern footwear industry in India. It has established a leadership position in the industry and is the most-trusted name in branded footwear. It sets more than 47 million pairs of footwear every year and serves 120,000-plus customers almost every day.

Bata India is the largest footwear retailer in India, offering footwear, accessories and bags across brands such as Bata, Hush Puppies, Naturalizer, Power, Marie Claire, Weinbrenner, North Star, Scholl, Bat a Comfit and Bubblegummers, to name a few. It retails in more than 1600 Bata own and franchisee stores, on bata.in and in thousands of multi-brand footwear dealer stores pan-India. To make its products accessible to millions of Indians, Bata has evolved its channels and has recently launched new channels like Bata Chat Shop, Bata Home Delivery and Bata Store-on-Wheels for neighborhood communities.

Posted by editor-manu-sharma at 8:47 PM