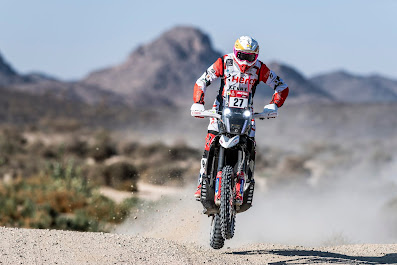 Starting first for the team, Sebastian Buhler started the stage well but chose a wrong track along with a group of riders about 20 kms into the stage, which resulted in him riding alone in the dust for most of the stage. Having lost time, he finished the stage at the 29th position.

Joaquim Rodrigues started well but decided to exercise caution to avoid any unwarranted incidents right at the start of Rally. Indian ace C S Santosh too decided to ride safe and finished at the 43rd position.

Overall, it was a cautious day for the trio of Hero MotoSports riders. However, it also provided a lot of confidence to the Team. The Stage also saw the new Hero 450 Rally bike passing its first big test of the Dakar with a flawless performance.

The riders will try to get into a better competitive rhythm in the second stage that is scheduled to go underway tomorrow. The 685 km Stage 2 will include a really long 457 km special taking the competitors from Bisha to Wadi-Ad-Dawasir.

Joaquim Rodrigues (Competitor No. 27) said, “It felt like a really long stage today. I didn’t start very confident and definitely my speed was also not up there. So, I decided to focus on navigation throughout the stage. But as soon as some riders passed me, there was a lot of dust and I lost my way a bit. But I am happy that the first stage is off my shoulder and now we take on the second one tomorrow.”

C S Santosh (Competitor No. 50) said, “It was definitely not an easy stage today. It was a really physical stage with a lot of rocks to go through so it was slow and you had to always watch the roadbook. There were lots of direction changes and tricky navigation to set you off the track. So overall I think it was a very tough first stage of the Dakar and it sets the precedence for the stages to come ahead.”

Sebastian Buhler (Competitor No. 24) said, “Today was a hard stage in general. It was more like an enduro stage but over stones. I made a small mistake in the beginning in choosing a track and after that I was pretty much riding alone in the dust which was very difficult and risky.  But it’s only the first day so I am happy to be back at the bivouac safely and tomorrow we will try to do better.”

Provisional Overall Rankings at the end of Stage 1