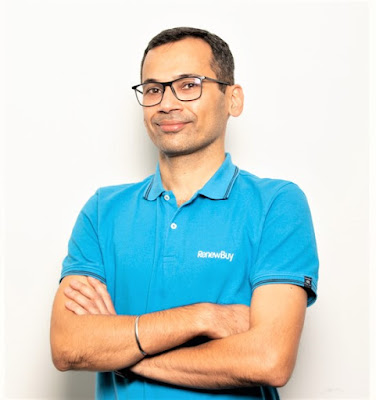 After successfully reaching out to almost 2 million customers, with its presence across 600 districts in the country, RenewBuy plans to take the market leader positioning with the launch of its new brandcampaign. The campaign is aimed at building brand awareness across the country, amongst masses and its core users, who are the insurance advisors.

RenewBuy is India’s second largest InsureTech company, with a vision to make insurance simple and accessible to everyone. Throughits digital, branchless model, RenewBuy plans to expand its outreach to 1000 districts in the next two years. The brand campaign will help inreaching out the brand’s core proposition to the consumers.

Speaking on the campaign launch, Balachander Sekhar, Founder and CEO, RenewBuy said, “It is our vision to simplify insurance and make it accessible to all Indians. Insurance is one sector which has a huge latent need but there is lack of awareness and easy access. Due to its complex product structures and physical, branch-led distribution model, insurance is highly under-penetrated in the country, especially in Tier 2 & 3 cities. Our company has been established with the vision to bridge the insurance supply gap, and make it reach out to every corner in the country through a highly transparent and digitally enabled POSP advisor led model. The last five years have been a testimony to our growth story. Our new brand campaign aims to bring alive our core proposition for the consumers.”

The campaign which has two short films will be launched by RenewBuy this year end, with a geo-targeting strategy. While one film is aimed at connecting with the urban millennials, the other one has a fun driven Indian connotation to bring in connect with every household in Tier 2 and 3 cities. The two ad films for the campaign are a step towards generating awareness around the ease of access to get insurance digitally.

Speaking on the marketing strategy of the ads, Mr. Devesh Joshi, Chief Marketing officer at RenewBuy said, “Digital today is the most viable option as it has deep penetration into the urban and rural India. Post Covid, there has been a sea-change in the digital content consumption pattern, wherein, the consumption has almost doubled in the last six months. We are launching the ad films on YouTube, which has an outreach of more than 300 million viewers in the country.RenewBuy is trying to address the unaddressed insurance needs, where there is demand but lack of supply, hence we have devised the urban and rural strategy.”

Commenting on the ad film conceptualization, Mr. Joshi said, “Our research shows that women are playing an important role in key household decisions and especially for insurance. Hence our films have portrayed strong women protagonists who are helping the family take the right decision.”

The concept behind the ad films is to break the long-standing notion that men are more aware of financial services and products. With a sense of women empowerment incorporated in both the ads, they highlight about RenewBuy’s insurance advisors making the whole process of insurance easy and seamless through its digitally enabled, transparent and simple model. RenewBuy’s insurance advisors make it easy for consumers to understand insurance products and hence make the right decisions.

RenewBuy is the fastest growing full-service digital insurance platform in India. Having established their leadership in motor insurance category, the company now offers Health Insurance, Life Insurance and Travel Insurance. The company has revolutionized the category by simplifying the way insurance is bought, sold, and serviced in India. Since its inception, the company has on-boarded more than 35,000 POS partners and insured more than two million customers across 600 cities and towns. Using technology as an enabler, the company has created differentiation in consumer experience and service, as well as in the geographical expansion of the sector.

Posted by editor-manu-sharma at 12:38 PM