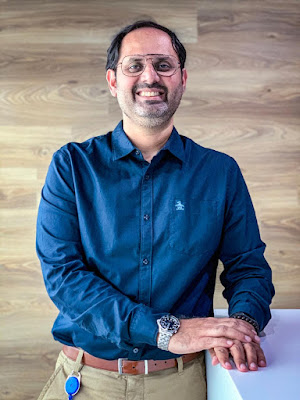 Leading B2B travel SaaS company, ITILITE, announces the appointment of Fareed Mannan as their new Vice President – Sales. A seasoned tech evangelist and one of the first members of the LinkedIn team in India, Fareed joins ITILITE and will accelerate the company’s growth in the Indian market and its global expansion.

Fareed has a proven record of 19 years in helping technology companies become market leaders. At LinkedIn, Fareed helped build the India Sales Team, and scaled South India as a region into one of the largest markets for LinkedIn in India. As one of the first leaders for the country, Fareed took up various responsibilities at LinkedIn and was leading their talent and learning business before joining ITILITE. He has also worked with global leaders like Verizon, and Sprint during his career.

Commenting on his new move, Fareed says “When my conversations with ITILITE first started, I was struck by the similarity between LinkedIn, and ITILITE. Both are working to change the face of the industry, believe strongly in adding value to customers without fail, and demonstrate a sharp focus on aggressive growth. I am extremely excited to be a part of the next phase of growth of a company like ITILITE. It is an exciting world where the value of digital is obvious, and it is a matter of starting great conversations & building them into great relationships.”

After leading the digital transformation of the Indian HR industry, Fareed will now lead the ITILITE team into a similar transformation the corporate travel industry is undergoing today. Over the last few quarters, ITILITE has been seeing an increased demand for digitization of corporate travel across industries, and Fareed will play a key role in harnessing it with a robust and upskilled team. Since its $13Mn Series B round in April’20, the company has introduced multiple new capabilities into its platform and launched new products and services to ensure traveler safety and improve process efficiencies. Fareed will be instrumental in leveraging these tailwinds to deliver customer delight with future-focused digital transformation.

Mayank Kukreja, Founder & CEO, ITILITE adds “It is an exciting time for us all. In the new normal, the need for digitization has become more acute and the focus of every boardroom conversation. Business travel is recovering rapidly, and we are seeing strong demand for a digitized approach for travel management and for keeping employees safe. Having Fareed join the team is another great boost to our growth. We look forward to establishing our market leadership with his expertise in building high performance tech businesses.”

The company has grown its customer base of mid-to-large enterprises, across India, United States and South East Asia. It has also launched new product lines to help businesses optimize their expense management process, deployed a bot for GST reconciliation, and launched ITILITE Clique to bring the comfort of business travel to personal bookings of its users.

Founded by Mayank Kukreja, an alumnus of IIT Delhi and IIM Ahmedabad and Anish Khadiya, an IIT Kharagpur and IIM Lucknow graduate, ITILITE is setting out to change business travel, from ground up. An end-to-end automated platform built for businesses, ITILITE enables companies to save upto 30% on their annual travel expenses.

ITILITE has won several awards over the last few years - Super Start-ups Asia 2019, Best Start-up at the Melting Pot 2020 Innovation Summit and the Start-up Challenge at the Wharton India Economic Forum 2019 among others. ITILITE has also been privileged to partake in the fourth batch of Oracle’s Start-up Cloud Accelerator in 2018.