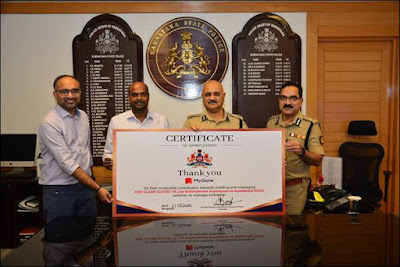 Karnataka State Police today honoured MyGate, the country's leading player in the community management space, for their contribution towards the efforts of the state police department during the lockdown. MyGate had, on a pro-bono basis, provided their technical expertise to build and manage the KSP Clear Pass, which issued over 2 lakh e-passes to Bengaluru citizens during Phase 1 & 2 of the lockdown.

About MyGate- Founded in 2016, MyGate is the largest security and community management app in the country, simplifying urban living of over two million homes in 10,000+ housing societies. It was ranked #4 on YourStory’s list of India’s Most Disruptive Start-ups in December 2019 and one of India’s coolest start-ups by Business Today in 2019. MyGate was founded by Vijay Arisetty, an ex- IAF pilot (Shaurya Chakra awardee), Abhishek K, former VP at Goldman Sachs, and Shreyans Daga, former project head at Oracle and Digit.