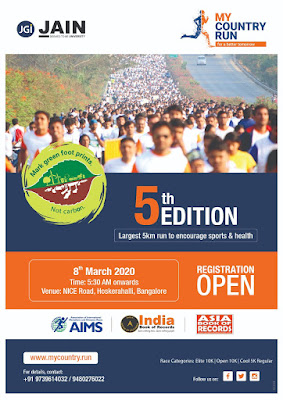 My Country Run, Edition 5, supported by Jain (Deemed-to-be University), the largest 5km run, is coming to Bengaluru with its fifth edition on Sunday, March 8th 2020, Nice Road Tollgate, Hosakerehalli. To cheer for the participants many prominent dignitaries & public personalities – such as Shri C T Ravi, Minister of Tourism, Kannada & Culture, Sports and Youth Affairs, Govt. of Karnataka, Shi Tejasvi Surya, Member of Parliament- Bengaluru South, have confirmed their presence for the run.

MCR is certified by AIMS (Association of International Marathon and Distance Races), and is the largest 5km run to encourage sports and raise awareness about health in Bengaluru. In its 5th year the event is expected to witness 15,000+ participants. There are three categories in MCR – Elite 10k, Open 10K & Cool 5k.

Speaking on this momentous fifth edition of the run the spokesperson, Col (Hony.) Dr. N Sundararajan, Vice Chancellor, Jain (Deemed-to-be University)  said, “As we start gearing up for the fifth edition of My Country Run, I must say I am extremely delighted by the acceptance and encouragement we have received for our previous editions. With our motto of #RunForABetterTomorrow this year we are expecting a greater participation and awareness about health & fitness.

“As a nation, it’s heartening to see Govt. promoting “Khelo India”, which is a big boost to the nation where sports was never considered as a career option. I am hopeful that My Country Run will surely create that awareness. I urge Bengaluru to come forward and participate in large numbers.” He Added.

MCR has reached out to more than 500,000+ people and a turnout of 40,000+ enthusiast runners in the first four editions. It is entering into the 5th edition with trust and support of thousands of like- minded people joining hands to support the cause. My Country Run is entitled in India Book of Records & Asia Book of record.

As a part of its value system, Jain (Deemed-to-be University), believes in the concept of promoting health and encouraging individuals to pursue their passion. This belief system is the root for organizing ‘MY COUNTRY RUN (MCR). As a part of its Social Impact Initiative to achieve the following objectives;

* To create awareness on good health and wellness for every single individual in the country that, in turn, transforms into a Healthy Nation.

* To support deserving sportsmen with the best facilities and equip them to excel at National and International   level   and   also   to   create   the   next generation OLYMPIANS from India.

* To create a sports Eco System/Community of Sports

Online registrations are open for everyone. Health enthusiasts and runners can register themselves by visiting the website www.mycountry.run.
Posted by editor-manu-sharma at 3:27 PM