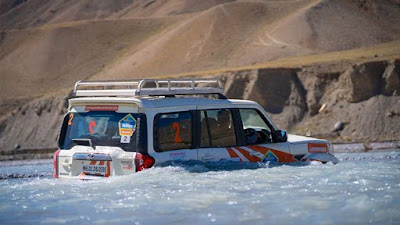 Mahindra & Mahindra Ltd. (M&M), concluded the fifth edition of the Mahindra Adventure ‘Club Challenge’ where the top 15 off-roading clubs from across the country, competed for off-roading honors.

Participants from the best off-roading clubs from across India battled at the ‘Club Challenge’ to win the coveted title of ‘Best Off-Roading Club’ in India. All obstacles focused on teamwork rather than on individual performances. The Club Challenge kicked off on February 22, 2020 with exciting night stages. The next day, February 23, 2020 witnessed the day stages and concluded by a grand award ceremony in Bengaluru.

The signature obstacle ‘Demolition Derby’, continued to be a part of this year’s challenge, as the off-road vehicles negotiated a path over scrapped vehicles. Another iconic obstacle ‘Pass the Baton’ witnessed all classes of vehicles run a relay format of driving and pass the baton from one vehicle to another tackling the obstacles and then crossing the finish line. Some of the new obstacles introduced this year were Straps of God, Drag Race and Tug of War.

A unique concept to showcase the tough and rugged DNA of Mahindra vehicles, Mahindra Adventure functions as an umbrella brand with a series of self-drive overland adventure expeditions organized under its banner. Mahindra Adventure was launched as an independent entity for all adventurous activities, in 2011, headed by Bijoy Kumar Y, Chief of Adventure Initiatives. He is a motoring enthusiast and the erstwhile editor of a popular motoring magazine.

To spread the DNA of off-roading, the Mahindra Adventure team has also launched the Mahindra Adventure Off-Road Training Academy in Igatpuri, India’s first dedicated facility providing a one stop solution to learning everything about a Mahindra 4WD vehicle and how to use it to its full potential. Through this, we hope to leverage the brand’s off-road heritage, showcase the vehicles abilities and give the participants the confidence to explore the limits of the vehicles. Custom-made Mahindra Thars equipped with radio sets are exclusively used as training vehicles at the facility. After dominating the Rallying scene in India with back to back victories in 2017, 2018 and numerous Cross Country Rally wins; the Super XUV500 has made way for the new kid-on-the-block the Super XUV3OO. The potent R2C spec XUV3OO won the last round of INRC 2019. And is roaring to set the stage on fire this year.
Posted by editor-manu-sharma at 9:16 AM