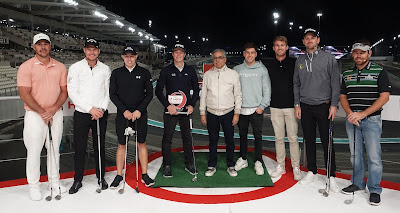 Yet another thrilling edition of the innovative one-hole-knockout night golf contest, the Hero Challenge, culminated in Abu Dhabi, teeing-off the 2020 season amidst a loud cheer from fans.

Viktor Hovland clinched the winners’ title and called ‘The Hero Challenge’ his ‘first’ professional win. He put on an amazing display of wedge play under lights at the iconic Yas Marina Formula 1 Circuit.

With this ‘The Hero Challenge’ made an impressive debut in Abu Dhabi ahead of the Abu Dhabi HSBC Championship.

Norwegian Hovland, 22, a former World Amateur No. 1, uniquely scored with every single shot as he emerged a winner, over World No.1, Brooks Koepka in the semi-final and then beat former Open champion, Louis Oosthuizen with another precise show.

Hero MotoCorp, the world’s largest manufacturer of motorcycles and scooters, recently extended ‘The Hero Challenge’ on the European Tour until 2022, with the number of annual events increasing from three to five. The Abu Dhabi edition marked the first Hero Challenge of the 2020 season.

In this edition of the Hero Challenge, players were required to hit from a customized platform, about 100 yards from the target, which had colored zones worth five, 10, 25 and 50 points for each shot, depending on where it lands.

With his final shot of the night worth double, Hovland found the ‘Bull’s Eye’ for 50, which doubled to 100 points. His total of 190 points was way more than Oosthuizen’s 55.

Hovland, who turned professional after the US Open last year, and now has a PGA Tour card, said, “I can’t complain, it was a pretty good start to the week. It’s an insane venue; I have never been to a place like this, so what a place to get my first professional victory!”

He added, “I hit some nice wedge shots tonight so hopefully that carries through to the tournament this week. To win the Hero Challenge is pretty cool and I’m looking forward to playing in the Abu Dhabi HSBC Championship in a couple of days.”

In the group stage, Koepka and Wiesberger progressed to semi-final from Group 1, while the 2016 Masters winner Danny Willett was eliminated. Oosthuizen and Hovland moved ahead from Group 2 while Matt Fitzpatrick, a former Hero Challenge winner, was eliminated.

Hovland became the 11th different winner in 11 editions of the hugely popular Hero Challenge, which was broadcast live.

Following Abu Dhabi, the event moves to Europe for three more exciting editions, including the Scandinavian Mixed Hosted by Henrik and Annika in Stockholm, the Porsche European Open in Hamburg, and the Betfred British Masters, to be hosted by Lee Westwood at Close House. The series finale will take place ahead of the European Tour’s season-ending event in Dubai and will feature the winners of all four Hero Challenge events from 2020.