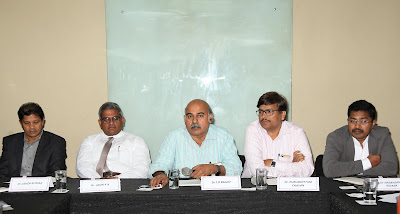 A group of prominent city doctors from different specialties met the media today for a discussion to separate facts from myths about Ranitidine, an active pharmaceutical ingredient (API) used in certain antacids. During the meet, the doctors said that there is lot of misconception and unnecessary confusion on ranitidine.

A popular, ages-old medicine used to treat gastric acidity, Ranitidine was commercially introduced in 1981 and has stood up to the expectations of medical fraternity for being safe and efficacious. Ranitidine features on the World Health Organization's List of Essential Medicines.

• US FDA has confirmed through their tests, by simulating what happens to ranitidine after it has been exposed to acid in the stomach with a normal diet and results of these tests indicate that NDMA is not formed through this process. 3
• Neither US FDA or DCGI have asked for a ban on ranitidine.
• Age-old medicine for treating gastric acidity
• Features in WHO’s List of Essential Medicines 4

Contrary to the popular perception created, Ranitidine has not been banned. None of the key pharmaceutical regulators such as the US FDA, the Drug Controller General of India (DCGI) /CDSCO have asked for a ban. However, the recall by a few manufacturers in India was purely voluntary. The US FDA tested numerous ranitidine products and found levels of NDMA similar to levels one would be exposed to if they ate common foods like grilled or smoked meats.

The US FDA in its recent statement issued on January 8, 2020 has said that NDMA is a known environmental contaminant found in water and certain foods. A person taking a drug that contains NDMA at-or-below the acceptable daily intake limit every day for 70 years is not expected to have an increased risk of cancer.2

Reiterating US FDA’s stand on the issue, Dr. T. R. Raghu, HOD-Cardiology, Sri Jayadeva Institute of Cardiovascular Sciences and Research said, “The USFDA, in its statement, has confirmed that ranitidine does not lead to cancer in typical stomach conditions of humans. Cardiologists like me have been prescribing ranitidine for several years, and haven’t yet come across any adverse reactions in our patients. Ranitidine is an age-old molecule commonly prescribed by cardiologists with other drugs for heart. It is a safe and efficacious drug for hyperacidity. In fact, ranitidine is better because it does not cause drug interaction with Clopidogrel and Aspirin (which cardiologists prescribe often) unlike other class of antacids.”

Echoing similar opinion, Dr Ashok Kumar, Professor and HOD, Cardiothoracic and Vascular Surgery, Sri Jayadeva Institute of Cardiovascular Sciences and Research said, “The CDCSO/DCGI never banned ranitidine. They have only asked the state bodies to get the product tested from manufacturers. Blood thinning agents are given to cardiac patients which causes hyperacidity. In order to counter this acidity, ranitidine is prescribed in combination, and we have always found it safe for our patients over so many years. Ranitidine is given to outdoor patients as well as to those patients in ICU when they are dealing with stress ulcers.”

Dr Nagendra Kumar, Consultant Pediatric Gastroenterologist, Hepatology and Nutrition, Indira Gandhi Institute of Child Health, Columbia Asia Hospitals said, “We have gathered here to dispel the misinformation around ranitidine. It is an age old molecule, low priced and affordable medication. I have been prescribing my patients for ranitidine for years and none of my patients have reported any serious adverse effect of the medicine consumption. There is no co-relation between ranitidine and cancer seen in my practice of so many years.”

Dr Purushottam Chavan, Assistant Professor, Head and Neck Onco-Surgeon, Kidwai Memorial Institute of Oncology said, “US FDA has clearly stated that a person taking a drug that has NDMA below the acceptable limit every day for 70 years is not expected to have an increased risk of cancer. Also, ranitidine is usually prescribed for short duration. As per the latest update from US FDA, the acceptable daily intake limit for NDMA is 0.096 micrograms (96 nanograms) or 0.32 ppm for ranitidine containing products.”

Dr Arun KN, Nephrologist,  Bhagwan Mahaveer Jain Hospital said, “Ranitidine came to India in 1980s when I was a medical student. Surgeries for peptic ulcers, which were one of the commonest surgeries in those times, have become very rare within a decade after ranitidine came. At present, there is a lot of confusion among patients, media and healthcare practitioners about ranitidine and its side effects. The USFDA has certified that ranitidine is safe for human consumption. NDMA is a naturally occurring contaminant which is present in air, food, water etc. As a senior nephrologist, I want to assure patients that ranitidine is a safe and reliable drug. Recently, the Brihanmumbai Municipal Corporation (BMC) asked Ranitidine to be made available again in all civic hospitals and dispensaries for use after seeing the test reports on Ranitidine from the laboratory which showed no contamination in the drug. The test reports prove that the drug is safe for consumption.”
Posted by editor-manu-sharma at 7:39 PM