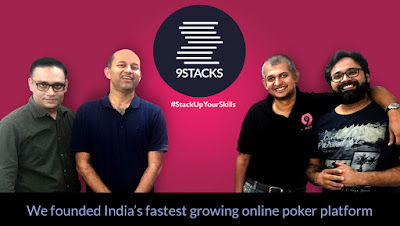 9stacks.com, the best online poker platform for the Indian poker players, has always proved its mettle. This time also it has won the hearts of poker enthusiasts with six of its players winning awards at the Indian Poker Championship(IPC) 2020 in Goa. The IPC kicked off on January 14 and will continue till 19th of this month.

Speaking on the occasion, Mr. Sudhir Kamath, CEO & Co-Founder, 9stacks, said, “It is wonderful that so many of our players have been recognized for their success at poker. I extend my heartfelt congratulations to all the young achievers who have performed well in the IPC and want to wish them a great future in poker. 9stacks, with its innovative ideas, has always provided a user-friendly platform to its players and is determined to become the India’s most preferred online poker destination.”

Ever since its inception in 2017, 9stacks.com has been offering emerging professional poker players a chance to compete with the best at live events around the world. This year, 9stacks Team India is participating at the Goa IPC and has previously sent players to Vegas, Manila, Czech Republic and Thailand. In particular, 9stacks has sent dominant teams to Las Vegas for the World Series of Poker - in 2018, 25 players represented 9stacks Team India in Vegas, and two of them finished in the top 100 of the 8000-entrant Main Event there. In 2019, as many as 65 players qualified for Vegas, and this year’s LFGVegas3 promotion kicked off next week with a target to enable even more players to chase their Vegas dreams.

As the poker industry continues to grow in India, awards functions like IPC recognize current success stories and encourage more players to play poker, and the ever-increasing numbers for the IPC are proof of this. Live as well as online poker has seen phenomenal growth in India in the last three years.
Posted by editor-manu-sharma at 5:32 PM