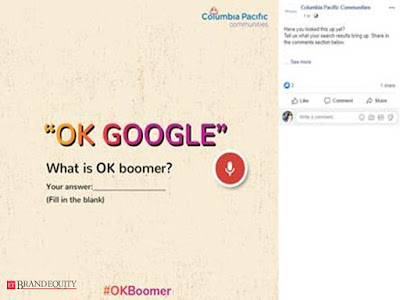 Columbia Pacific Communities kick starts 2020 with a topical campaign titled “Ok, Boomer,” that aims to call out ageism and propagate the philosophy of “positive ageing,” the brand’s core philosophy.

"OK Boomer" is an ageist catchphrase that came to existence as an internet meme in 2015. By mid-2019, millennials and younger generations started to widely use it to dismiss or mock the Baby Boomer generation as narrow-minded and outdated. Mainstream media has covered this phenomenon widely.

To challenge the catchphrase, Columbia Pacific Communities launches a 10-day campaign by the same name to bat for the seniors and position Baby Boomers as a generation that not only made path breaking contributions and continue to do so but also remain extremely relevant.

With many decades of experience in tackling life behind them, senior citizens are the ‘go-to people’ for advice ranging from life, health, parenting, career. The campaign urges the audience to leverage the rich experience and wisdom of baby boomers and turn to them for life advise, just the way they would turn to google to answer some of their life dilemmas.

Commenting on the social media campaign, Piali Dasgupta, VP – Marketing, Columbia Pacific Communities says, “Our campaign has been conceptualised capitalising the ageist catchphrase “OK Boomer” that came into existence as an internet meme in 2015. It is a reaction to the catchphrase. By mid-2019, millennials and younger generations started to widely use it to dismiss or mock the Baby Boomer generation as narrow-minded and outdated. We, as a brand, stand for showing the world the power of positive ageing.

The campaign was conceived to not just celebrate the contributions of baby boomers in various fields such as technology, music, art and culture, but also leverage the rich life experiences and wisdom of senior citizens to share life lessons and advise. ”

The campaign aims to redefine the term “ok boomer,” used often as an insult towards senior citizens and instead presents golden agers as a generation that has paved the way  for the current generation.

The campaign, being run on Instagram and Facebook pages of Columbia Pacific Communities, and also as search ads on Google, comes with a call to action. The audience is urged to share their worries or dilemma in the comments sections that will be answered by the expert seniors from the community.

Let's end ageism and begin a meaningful, positive conversation with boomers.
Posted by editor-manu-sharma at 5:49 PM