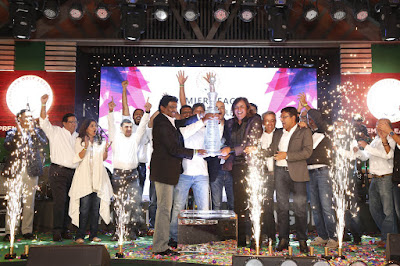 Fanzart Eagles, the pro-league golf team owned by luxury designer fan brand Fanzart recently emerged champions in the Pro-League Tournament held at the end of 2019. The tournament took place over a period of 4 months leading up to 8 teams playing the final. Fanzart Eagles, comprising 18 players, all chosen based on their handicap, won the finale match against Team Britannia Bourbon to be declared winners, with 352 points. The competition was a close one.

Speaking on the win, Anil Lala, Founder and Director of Fanzart and team owner said, “We are really proud to have lifted the trophy and appreciate the efforts of our team in securing the win. The team has some fabulous single handicap players like Arun Bajaj, Rahul Bhalla and Prahlad Rao, golfers who have ensured the team logo of a soaring Eagle has touched great heights”.

Accepting the trophy and speaking on the win, the captain of Fanzart Eagles, Arun Bajaj said, “We are glad to have emerged winners in the tournament. Kudos goes to the team for their great work. We faced strong competition from Team Britannia Bourbon who played a wonderful game as well. We hope that this is the first of many wins for us as a team”.

Fanzart Eagles is one of 20 major pro-league teams that participated in the tournament. It has 18 players, chosen on the basis of their handicap. Among the other major brand teams were names such as Britannia, Prestige, Kirloskar and more. The team is backed by luxury designer fan brand Fanzart, which strongly believes that as a luxury brand, the association with this sport is a great one.

Since 2012, Fanzart has risen to prominence as a pioneer and leader in the luxury designer fans segment. With showrooms across the country, Fanzart is a name to reckon with in the luxury interior segment with its niche offerings. The products are also shipped internationally and have made a mark for themselves.
Posted by editor-manu-sharma at 3:48 PM