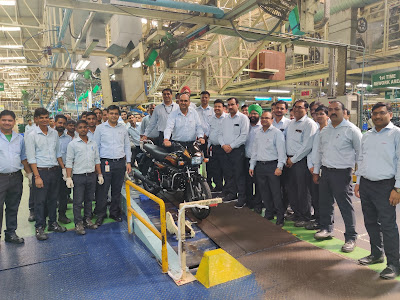 Hero MotoCorp, the world’s largest manufacturer of motorcycles and scooters, has crossed yet another milestone in its illustrious journey, with its manufacturing facility at Haridwar, in the northern Indian hill state of Uttarakhand achieving the unique distinction of surpassing 25 million units in cumulative production.

The manufacturing facility, commissioned in April 2008, has achieved the milestone in just over 11 years of operation - an industry record. The Haridwar facility of Hero MotoCorp is also the world’s largest two-wheeler manufacturing plant with an installed capacity to produce 9500 vehicles per day.

Speaking on the occasion, Mr. Vikram Kasbekar, Executive Director (Operations) and Chief Technology Officer, Hero MotoCorp said, “This is a significant milestone for not just our Haridwar manufacturing plant, but also the entire organization. The manufacturing practices that we follow at Hero MotoCorp have always set new benchmarks in the industry. The production of 25 million two-wheelers at our Haridwar plant in such a short period of time since its commencement of operation bears testimony to the dedication and competency of the team. We are grateful to all our valued customers, partners, investors, the state government of Uttarakhand and all other stakeholders for their continued support and faith in us..”

The plant produces Hero MotoCorp’s popular motorcycles – HF Deluxe, Splendor+, Splendor iSmart 110, Passion Pro and Passion 110. With a robust supply chain, it sources 75% (in value) of the parts from industries within Uttarakhand.

Hero MotoCorp currently has seven globally benchmarked manufacturing facilities, including five in India and one each in Bangladesh and Colombia. The plants located in India are at Gurugram and Dharuhera in Haryana, Neemrana in Rajasthan, Halol in Gujarat and Haridwar.
The Company’s eighth manufacturing facility is coming up at Chittoor in the southern Indian state of Andhra Pradesh.

The combined installed annual production capacity of Hero MotoCorp is currently around nine million units.
Posted by editor-manu-sharma at 6:49 PM