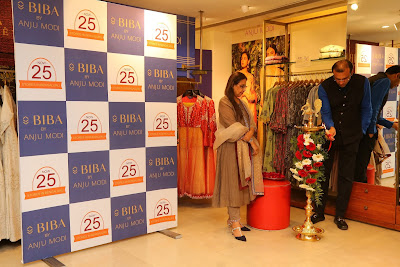 BIBA, the leading pan-India ethnic label, achieved a landmark in its retail journey as it touched 25 stores in Bengaluru city alone with another 10 in other parts of Karnataka, taking a total retail count to 83 stores in Southern India.

The largest and the newest flagship store of the brand is situated at Jayanagar and is spread across 2300 Sqft in the city. To celebrate the brands retail journey and add festive excitement to its extensive portfolio the brand announced the “BIBA by Anju Modi “collection with the acclaimed designer Ms Anju Modi.

Ms. Anju Modi is the award winning Bollywood designer who’s known for her rich ethnic designs and  has designed outfits for some of the  biggest movies such as “Bajirao Mastani “ and “Ram Leela”. BIBA By Anju Modi is targeted at those consumers who are looking at designer designs and styles at smart pricing. The range starts from Rs.5995 and goes upto to Rs. 29,950.

Since inception, BIBA’s journey has been a fascinating one. The brand has managed to evolve and innovate with its offerings, styles and digital communications. In 2011, taking a cue from the highly unorganised kids ethnic segment, BIBA launched a standalone dedicated line‘ BIBA Girls’; a vertical which caters to the ethnic apparel requirements for kids aged 2-15 years.

Today, BIBA Girls is available across 255 stores, along with being available through a shop in shop format in56 stores. The evolution did not stop with apparel as in 2017, BIBA successfully steered itself into launching a fashion jewellery line ‘BIBA Jewellery’ which has been launched in metro cites and so far is doing extremely well.

Commenting on retail growth, Mr. Siddharath Bindra, Managing Director, BIBA said, “BIBA as a brand has grown with its consumers and has kept its consumer’s needs very close to its heart. We are extremely excited to reach a count of 25 stores in Bangalore and would like to thank all our patrons for helping us reach this milestone and giving us such a great response. It’s an honour to be in Bangalore and to launch the Biba by Anju Modi collection which is our new offering for the festive season. Constant innovation and providing the best in style and quality to our customers is our endeavour at Biba.”

Over the last few years, BIBA has been adding layers to its portfolio by tying up with designers such as Rohit Bal, Manish Arora and recently launched an Indie Mickey range.

‘BIBA by Anju Modi’ is a fine amalgamation of Anju Modi’s signature design sensibility married into BIBA’s ethnic brand lineage which is a great combination  for the upcoming festive season. The range comprises of metallic and floral prints, intricate hand embroidery and fine zari work on pure fine fabrics like silk, chanderi, velvet and modal.

Speaking on the association, Anju Modi said, “Working with BIBA has been great- as this association has allowed me to showcase my designs across the massive retail network of Brand BIBA. BIBA enjoys a great geographical spread and this partnership allows many more people to experience my designs and a good quality product. I am really excited and looking forward to a fruitful and a meaningful association going forward.”
Posted by editor-manu-sharma at 9:09 AM

Hello! Hope you are doing well, thank you very much for sharing this information. I myself have been searching for IIT-JEE coaching college in hyderabad to start preparing for the exams. I found this institute that offers both online classes as well as recorded video lectures for all courses. Fellow aspirants please do check it out! All the best!