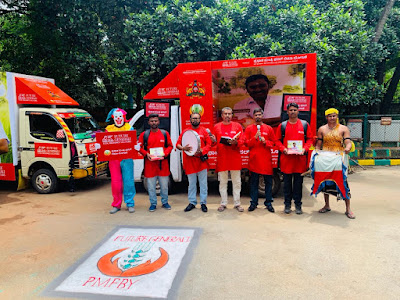 PMFBY offers an end-to-end insurance cover by providing financial support to the farmers against losses/damage of crops arising out of unforeseen events during the entire cycle of the crop. Activities like dance acts and street plays will be performed in these villages to promote awareness on PMFBY. The street plays will be based on the importance and the benefits of having cover under PMFBY.

Dr. Shreeraj Deshpande (Principal Officer & CEO (Officiating), Future Generali India Insurance Pvt Ltd.said, “Pradhan Mantri Fasal Bima Yojana Scheme (PMFBY) is in line with Government’s ‘Minimum Premium, Maximum Insurance for Farmers’ theme and with these roadshows, our aim is to educate farmers in remote areas about PMFBY,  which will help  them to have some financial stability when there is a loss/damage of the crop.”

9 Van Campaigning  teams will travel from the Department of Agriculture, Bangalore to their respective districts. The vans will spread over various villages across below mentioned 9 allocated districts from June onwards.  .