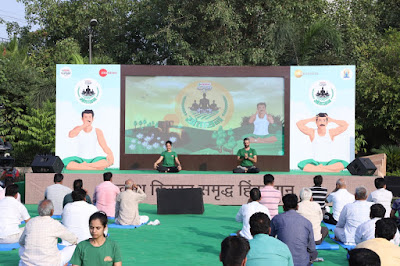 Castrol India Limited, the leading automotive and industrial lubricant manufacturing company in the country, today announced its health outreach programme for the food providers of the nation – the farming community. This campaign will extend specially curated yoga aasanas Castrol CRB Plus Khet Aasana to farmers to help reduce health adversities they face caused by their stressful and laborious schedules.

The results of a detailed independent research, covering over 700 farmers across five regions in India, commissioned by Castrol India this year threw up some startling results.  The study, which attempted to assess health issues faced by farmers as a linkage to the nature of their job and working conditions revealed that physical stress is a concern among farmers currently. 68% farmers reported that they suffer from musculoskeletal problems while digestive issues were reported by over 51% farmers, respiratory problems were raised by over 31% farmers, and another 30% reported suffering from diabetes. In addition to this, the study also found that over 50% farmers face stress and other relative diseases such as hypertension, anxiety and depression. Farmers also subscribed to the myth that farm work is healthy employment, due to which over 65% of them were not undertaking any physical activity to manage their health.

Kedar Apte, Vice President - Marketing, Castrol India Limited said, “Farmers are an important community in India and need to be acknowledged for their tireless efforts to provide the nation with nutritious produce. This, in turn, fuels a healthy population and keeps India moving. Unfortunately, their own health remains out of their consideration. Through Castrol Khet Aasana, we at Castrol India are committed to empower farmers with yoga aasanas to help avoid and reduce unhealthy nuances of their work, enabling them to lead healthier lives. Castrol Khet Aasana is a reiteration of Castrol India’s purpose-driven approach and commitment to care for and contribute to the well-being of our consumers.”

Commenting on the launch of the Castrol Khet Aasana, which took place at Azadpur Mandi, New Delhi today, Hon’ble Union Minister of the State - Agriculture & Farmers Welfare Parshottam Rupala, said, “Keeping in mind the agricultural business and farmers, creating yoga aasanas on the basis of their needs is a good effort in supporting the agricultural sector at large. Our country thrives on agriculture, so I would like to thank Castrol and congratulate them on initiating an activity that helps keep our farmers healthy.”

Minister of State (Independent Charge) Ministry of Ayurveda, Yoga & Naturopathy, Unani, Siddha and Homoeopathy (AYUSH) Shripad Naik said, “We must give more importance to the physical and mental health of farmers and these Yoga Aasanas can help relieve them of stress.”

The research study designed and executed by The Yoga Institute, Mumbai also established that over 70% of farmers showed keenness to learn and embrace yoga as a part of their lifestyle. Keeping their hectic daily routine in mind, 16 Khet Aasanas have been designed to be practised during the day. These aasana sequences have been devised and named to ensure they are relatable to farmers and being byte-sized ensure time investment is minimal.

Building on the positive impact delivered by Castrol CRB Truck Aasana on over two lakh truckers nationwide, Castrol India plans to conduct Khet Aasana across 2,000 Indian villages with an aim to benefit over 120,000 farmers before end of 2019.
Posted by editor-manu-sharma at 6:04 PM