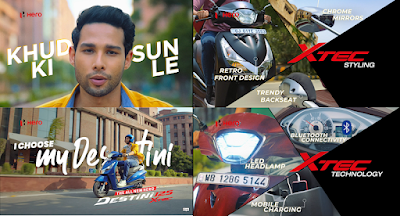 Following the success of Hero Pleasure+ Xtec #LadkiChalaRahiHai campaign, which challenged the clichéd "Arre pakka ladki chala rahi hogi," Hero MotoCorp has returned with the energized high-decibel #KhudKiSunLe campaign for the recently launched Hero Destini 125 Xtec. The campaign is engineered to be an enlightening instrument intended to help the youth to rationalize societal expectations of fitting into the widely acknowledged definition of being acceptable.

In the commercial actor Siddhant Chaturvedi, is seen riding a stunning Destini 125 XTEC in Nexus Blue Colour. Along the way, he encounters young people who are involved in various scenarios where their decisions are overridden by those of others. Siddhant performs a powerful rap throughout to enlighten these youngsters to the reality behind their obvious choices.

Through the rhythm of an intense rap with a pivotal turning point – Khud Ki Sun Le!, the TVC intends to initiate a culture of making brave choices that are backed by discernment.

Commenting on the launch of the new TVC, Mr. Ranjivjit Singh, Chief Growth Officer, Hero MotoCorp said, “Our message aims to empower the youth to act on their inclination and normalize making brave choices, for their greater good. This is reflected in our newly launched, Destini 125 Xtec, which has been built with the most ergonomic features. It has retained its retro-frontal design, it sports a metal body and has added smart upgrades like Bluetooth Connectivity, Digi-Analog Speedometer, LED headlamp to be in sync with the times. And that has made it one of the most stylish and efficient of scooters on offer. It celebrates the confluence of two worlds – Style and Tech – to create the vehicle of choice for the confident, discerning and opinionated youngster. We are confident that Destini 125 XTEC will be a crowd-puller.”

Speaking about the new TVC, protagonist and Hero MotoCorp’s brand ambassador, Siddhant Chaturvedi said, "KhudKiSunLe is close to my heart for many reasons, one of them being that it reflects my personality. I have seen people not taking easily to being different or choosing the less-traversed path. The obvious reason has either been second-guessing themselves and their gut feeling or going with what the majority favours. In the process, they have lived with significant indolence weighing down the power of their expression. I have always believed in the rigour of making well-informed decisions and I am excited to be propagating the same through the Destini 125 XTC commercial.”

The TVC, conceptualized and executed by McCann Worldgroup, for the new-age Hero Destini portrays the Destini 125 XTEC for what it is - the perfect companion for the smart, confident, and daring youth who isn't afraid to follow their own instincts. The campaign is being brought to life through a robust 360-degree surround campaign panning across multiple platforms- TV, Print, Digital and OOH.

Posted by editor-manu-sharma at 5:16 PM