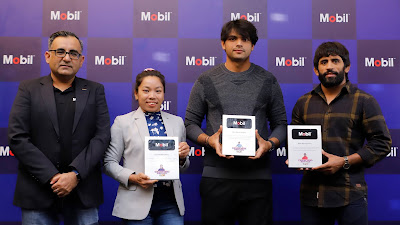 ExxonMobil Lubricants Pvt Ltd announced today the renewal of its brand ambassador association with the Tokyo Olympics medallists - Neeraj Chopra, Mirabai Chanu, and Bajrang Punia - for Mobil India. The announcement was made during a gala felicitation ceremony at New Delhi in the presence of the company’s top retailers.

Tokyo 2020 was India’s most successful Olympic campaign with a tally of seven medals. While Neeraj Chopra became the first track & field athlete and the second Indian to win an individual Gold medal, Mirabai Chanu is the first Indian weightlifter to win a Silver. Bajrang Punia, who won a Bronze at the event, is the only Indian wrestler to win three medals at the World Wrestling Championships. A common thread among these sportspersons is that they symbolize a powerful story of transformation, rising from humble beginnings to representing India at the Olympics.

Commenting on the development, Deepankar Banerjee, CEO, ExxonMobil Lubricants, said, “We feel extremely proud to renew our brand association with Neeraj Chopra, Mirabai Chanu and Bajrang Punia. Our engagement with them began before they achieved world fame, and hence it gives us immense pleasure to see them become the very best in their respective fields, winning major titles and medals at the Olympics. Like the athletes have made a difference to India and the sport they represent, we too will continue to work hard, building on Mobil’s world-class brands, synthetic leadership, and scale to bring trusted, high-quality performance products and solutions to the country.”

Speaking during the event, Imtiaz Ahmed, GM-Marketing Deployment, Consumer Marketing, ExxonMobil Lubricants, said, “The three champions personify Farak Laakar Dekhiye, what we stand for in India, which is not only our expertise, innovation and performance but also about giving people the confidence to unlock their ambitions for tomorrow. The athletes are a natural fit for us and we couldn’t be more pleased to be able to continue our association.”

Posted by editor-manu-sharma at 5:38 PM