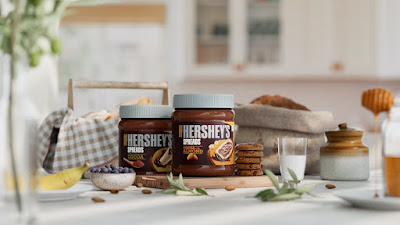 Post Office Studios, a leading animation and design studio, has come together with iconic confectionery brand Hershey’s for creating a promotional video content presenting its brand new packaging of the two Hershey’s Spreads - ‘Cocoa’ and ‘Cocoa with Almond.’

The multi-talented collective of designers, animators and visual-effects artists at Post Office Studios have conceptualized a powerful and engaging visual language with the objective to communicate the graphic change for Hershey’s existing Spreads to create organizational excitement and buzz amongst its consumer base. Always catering through innovation, the animation and new media tech studio has showcased the transition from the old package design to the new one with extraordinary creativity. The film zooms into the packaging contents like swirls of chocolate, almonds and cocoa powder, as well as the application of the spreads before finally revealing the exclusive new pack design on a breakfast table in all its glory. The creamy, rich chocolate swirling around the levitating Hershey’s Spreads bottles makes this film a magnificent chocolatey journey.

While 3D animation softwares such as Cinema 4D and Octane Render were used to create elements providing an authentic touch to the product, the marvellous choco swirl seen in the film was the result of many fluid simulations carried out using Houdini. The Photo Scanning technique was also applied to make the creative production culturally and geographically specific. All in all, the meticulous animation process has delivered an aesthetically pleasing and appealing film, making it a tempting paradise for every chocolate lover’s desires.

Speaking about the collaboration, Harsh Sharma - Sr Creative Director - Post Office Studios, said, “Chocolate is always mouth-watering - be it in real life or on the screen in reel life. We understood the brand’s precise requirement and seized the opportunity. The idea was to reveal the new packaging through a spectacular film. Creating visuals of luscious chocolate dishes proved to be more exciting than we could imagine. Using a perfect blend of photorealistic visuals and surreal renders, we conveyed the brand message in a simple, strong, yet tempting way.”

The design-driven innovative studio has built a strong record for itself, having specialized in motion design, cel animation, VFX, and more. Its team of designers and animators have always been passionate about turning ideas into motion by testing limits and breaking traditional creative boundaries with radical approaches and cutting-edge technologies. Steered by a love for storytelling through creating brand affinity animated content, Post Office Studios has been taking one giant leap after another in the young and thriving Indian animation industry - and Hershey’s new packaging reveal project is a testament to this.

Posted by editor-manu-sharma at 3:05 PM