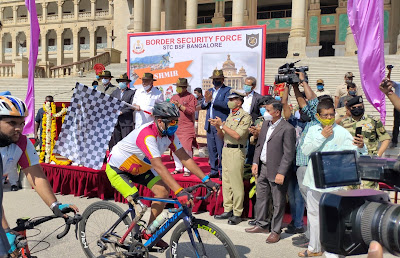 A team of 30 cyclists as part of Infinity Ride 2020, a brain-child of Aditya Mehta Foundation which has so far covered 31 cities during their challenging 3842km-long journey from Kashmir to Kanyakumari visiting 36 cities in 45 days, arrived in the city on Saturday. The Infinity Ride aims to spread awareness about para sports and scout talent to train and nurture them at Asia's first-ever Infinity Para Sports Academy and Rehabilitation Centre in order to groom the talent and prepare them to win medals for the country at the international stage.

“I appreciate the support Aditya Mehta Foundation is giving to para athletes and people with disabilities to get them into sports. I wish them all the best in their journey and future endeavors. May they continue to organise such rides in the coming future,” the hon'ble CM Yediyurappa said.

Earlier after arriving in the city, the riders visited Mitti Cafe—a chain of inclusive cafes entirely run by specially-abled people, and shared their own life changing experiences with the specially-abled cafe employees highlighting the fact about how sports have not only empowered them but as sportsperson representing India has given a purpose to each of their lives.

"It’s great to see people coming in to support us in this mission. I would like to thank Karnataka Government and Hon’ble Chief Minister BS Yediyurappa who came to flag off the ride and motivated us," said Aditya Mehta, the founder of Aditya Mehta Foundation and also a Limca Book of Records holder who is currently on a mission to create para sports champions for India.

“We are also grateful for the support received from DGP CID PS Sandhu. We started building a strong relationship with BSF since the time he flagged off the ride in 2013 which I rode alone from Kashmir to Kanyakumari. Since then he has been a mentor to the cause and vision to Aditya Mehta Foundation. And during our visit to Karnataka he helped us in every possible way,” Mehta added.

Following a stop in Bengaluru, the sixth edition of Infinity Ride will resume their remaining journey of 705km and head towards Tamil Nadu through Dharmapuri and further visit three more cities before reaching their destination Kanyakumari on December 31.

“Our vision is to make India a superpower in the world of para sports.” Aditya Mehta Foundation (AMF) is a non-profit organisation which aids people with disabilities to pursue sporting careers while also providing them self-sustenance. The Foundation, which started in 2013, has grown by leaps and bounds in the short span of time. Based in Hyderabad, the foundation has managed to span out to virtually every corner of the nation and have contributed in creating para champions who have been winning medals for India. It represents a unique cause and seeks to help a neglected part of a fairly large population.

The AMF raises funds through its signature Fund-Raising event, the Infinity Ride, and also scouts for talent among the population of people with disability and trains them from the grassroots as well. With the money raised, it also provides counselling and helps them get better at their sport or even find a sport that is suitable for them. It provides the necessary equipment, training and funding for these athletes as well to help them grow in their sport and compete at the International level. Along with the civilian talent, a major part of the foundation’s efforts is directed at finding and nurturing talent from nation’s Central Armed Police Forces (BSF, CRPF and ITBP), which have a number of soldiers who have suffered debilitating or permanent injuries while serving the country at the border or in naxal-hit areas and now are trained to become potential talents for the 2021 Tokyo Paralympics. In its sixth edition, the upcoming ride will take place from Kashmir to Kanyakumari; traversing 3842 km through difficult and mountainous terrain with support of Border Security Force (BSF) who have partnered and supported AMF to execute the ride. Border Security Force (BSF) was the only organisation who believed in our cause from the very beginning and supported us since inception of this ride and later Central Armed Police Force (CAPF) also joined hands for this cause.

Posted by editor-manu-sharma at 10:43 AM