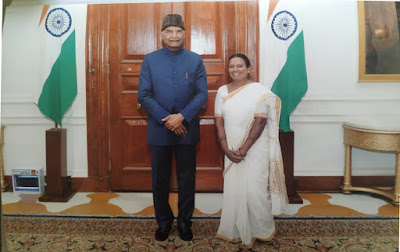 Ram Nath Kovind, the Hon’ble President of India recognised the work of Shobha Gasti, a feisty grass-root leader from Belgaum in Karnataka.  Her commitment towards girl child empowerment and empowering Devadasi women was acknowledged by The President of India through an invitation at Rasthrapati Bhavan where Shobha met him and shared her experiences.

She spoke at length on how girl children are getting tangled into early child marriage and the importance of education and awareness to fight such violations. She also mentioned about how Devadasi women have been facing years of oppression and her journey towards their empowerment.

Her work which has gained prominence in the state of Karnataka was placed to the Government of India by the state Government. Eventually she got a call from the President’s office and an opportunity to share her work with Shri Ram Nath Kovind.

Child Rights and You (CRY) have been supporting Shobha since 2012 on her quest to champion the work for child rights.

“I am honoured to be the voice for a community that needs attention, awareness and a greater consensus among the mass and senior policy makers. The highlight of today’s experience was the privilege to sensitise The President of India on the nuances of child right problems and the issues Devadasi women face. It was a true privilege to share with him the importance of civil society and how collectively we can eradicate it. I also brought his attention to the importance of education as a mitigating force on several child rights issue,” said Shobha Gasti.

“Shobha Gasti’s work on some of the most marginalised communities needs to be celebrated and this recognition by the apex office of the country is a richly deserved acknowledgement. In its journey over the past forty years, CRY has always believed in creating champions of change, which is aptly represented by Shobha. With her courage, determination and an unfailing resolute Shobha has brought a difference that stands the length of time. We sincerely hope her work encourages generations of young women to come forward and be part of a greater change we all hope to bring,” said Puja Marwaha, CEO, CRY.

Ms. Shobha Gasti, has been working towards the child rights issues and Devadasi women for more than two decades.  She started her community work as a volunteer for Devadasi Rehabilitation Project and later co-founded the Amma Foundation to give her movement a strength and shape. Today, she is one of the most influential women in the region who has dedicated her life towards the cause which she has promised to fight for.

Child Rights and You is an Indian NGO that believes in every child’s right to a childhood - to live, learn, grow and play. For 4 decades, CRY and its 850 initiatives have worked with parents and communities to ensure Lasting Change in the lives of more than 2,000,000 underprivileged children, across 23 states in India.
Posted by editor-manu-sharma at 3:12 PM