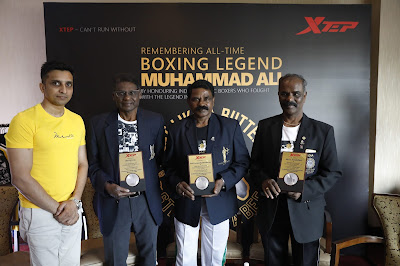 * S. Suresh Kumar, Minister of Primary and Secondary Education and Sakala of Karnataka inspires youth to adopt sports as a part of their lives and boost ‘Fit India' mission through his message
* Hong Kong based Xtep shares global best practices to make sports a people’s movement in India
* Xtep India plans to expand from one to seven cities by end of 2020

In a message to the audience, Shri S. Suresh Kumar said,  “Sports-Life will empower citizens to be active participants in community sporting activities than being passive consumers of sports products. As Minister for Education in Karnataka I have always been very keen to promote a sporting culture amongst our children. I have been making every effort to inculcate a sporting spirit in our young girls and boys in all the schools. I welcome the effort of Xtep in this direction that will lend an impetus to Fit-India movement launched by Indian Prime Minister Shri Narendra Modi,” he added.

“In the area of technology, Xtep Sports Science innovation lab researches runners’ data to produce functionally superior sports shoes for consumers. Xtep has introduced consumer sports-technology such as BMI and 3D printers to help the public select the right pair of shoes scientifically in community run clubs across China.

“In aspects of training and activation/alliances, Xtep has conducted over 200 marathons since 2011 in China and Vietnam and several football matches in Saudi Arabia. We have even partnered with Government of Vietnam to launch a people’s running event. Xtep has also collaborated with professional marathon runners to train the public.”

“For India market, in phase 1, we have introduced mass affordable and functional sports shoes for different fitness needs and consumer categories. We plan to expand to seven cities by end of 2020 to reach a wider consumer base. In phase 2, we’ll bring high-tech consumer sports technology to India. We’ll also partner with run clubs, Govt., private stakeholders, emerging sports aspirants, role models and trainers to nurture sports-life through community events. In phase 3, we’ll invest in sports infrastructure based on market demand,” he adds.

Commenting on the event, Vijay said, “Xtep draws its inspiration from Muhammad Ali’s principles of confidence, conviction, dedication, respect, giving and spirituality. These principles resonate with each of the Indian boxing champions who shared a moment in time with the legend. We hope they will continue to inspire more people to join the Sports-Life movement in India.”
Posted by editor-manu-sharma at 2:53 PM