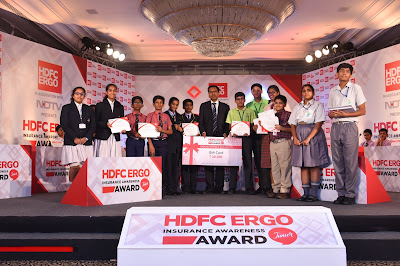 Launched in 2016, HDFC ERGO’s Insurance Awareness Junior Quiz Award championship is aimed at promoting and spreading insurance literacy amongst school students. Through Junior Quiz, HDFC ERGO reached out to over 54,000 students, imparting basic knowledge on Insurance through townhalls conducted in over 270 schools across the country. Expanding its footprint this year, the Quiz was held in 4 new cities of – Hyderabad, Ahmedabad, Pune and Ranchi along with the existing cities of - Delhi, Mumbai, Kolkata, Chennai and Bengaluru.  The Quiz was layered in two rounds – regional level & national level and targeted the students of classes VIII and IX.

Speaking at the Grand Finale of the HDFC ERGO Insurance Awareness Award Junior Quiz, Mr. Ritesh Kumar, MD & CEO, HDFC ERGO General Insurance said, “We believe that it is important to inculcate financial knowledge right from the school level. Addressing this, the HDFC ERGO Insurance Awareness Award Junior – Quiz is an innovative platform created to educate young minds about insurance at an early age. Besides building awareness on Insurance, the Quiz also tests the wits of these students and brings forth a healthy competition in a fun, exciting and engaging manner for the students to learn from. We are delighted to see a remarkable response from schools & students across the country and hope to grow this platform enormously, year after year.”

Each team put up a whole-hearted effort but the Delhi Public School, Ruby Park team from Kolkata took home the title of National Champions and rewards worth Rs.1,50,000/- and the School was awarded Rs 75,000/- prize money. Samsidh Mount Litera Zee School team from Bengaluru claimed the title as 1st runners to grab prizes worth Rs 1,00,000/- with Kairali School team from Ranchi bagging the 2nd runner up position and prizes worth Rs 50,000/-. The other participating team were awarded prizes worth Rs 20,000/- each for their efforts and participation in the Quiz.

The HDFC ERGO Insurance Awareness Award Junior – Quiz is the first of its kind initiative taken by HDFC ERGO to promote and spread insurance literacy amongst students as a necessary life skill. Enthused by the overwhelming response from the schools, HDFC ERGO looks to expand the Quiz to schools in more cities across the country in the coming years.
Posted by editor-manu-sharma at 3:04 PM