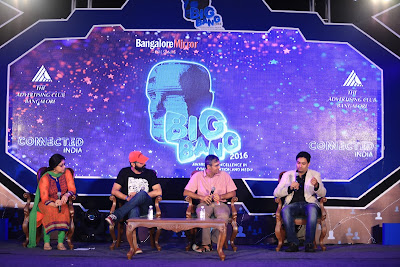 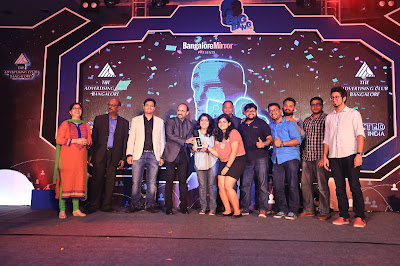 Ad Club Bangalore successfully concluded the 21st edition of its annual awards – Big Bang Awards for excellence in communication and mediaon September 23, 2016 at Jayamahal Palace, Bangalore. Among the Gold awardees include: Tata Sky for Client of the Year; Mindshare for Media Agency of the Year (Covers Digital, Mobile and Traditional Media); Maxus for Social Media Agency of the year; Stark Communications for Creative Agency of the Year; Saatchi and Saatchi Health for Healthcare Agency of the Year.
This year, the event wasn't just confined to awards night but was conceptualised in a manner to encourage the ideology of Connected India, which was the theme of the event. The evening commenced with eminent industry personalities- Nihaal Kashinath (Founder, IOT Bangalore), S Anand (Chief Executive Officer, Gramener) and Arunabh Kumar (Founder and CEO, The Viral Fever and TVF Media Labs) sharing their opinion and views as guest speakers on Internet of Things, Connected Data, and Connected Content respectively.
The program hosted some of the leading names of the communication and media industry and was a showcase of the impressive and outstanding work of organizations in this sector. With more than Seven Hundred influential figures in attendance, the night, besides being interactive and engaging, recognized the achievements of the recipients under the most coveted titles of the industry.

Stark Communications was named Creative Agency of the Year. Mindshare and Maxus were the biggest winners of the night bagging awards for Media, Digital, and Social Media Agencies of the year, respectively.  Saatchi and Saatchi Health won the Healthcare Agency of the Year.

Tata Sky Won the Client of the Year Award winning across several categories.

Commenting on the awards program, Sanchayeeta Verma, President Ad Club Bangalore and Managing Partner, Maxus, South India and South Asia, said, “We had unprecedented interest and participation in Big Bang Awards this year and the effort was to have a meaningful and enriching event for our media, creative and marketing fraternity. I am happy that we were able to do so. Also, we had really interesting and spirited work which truly epitomised Connected India. Our heartiest congratulations to all the winners.”
This year Big Bang awards were presented under four major categories – Creative, Media (Including Data and Tech), Digital, and Health. The awards assessment involved an online jury selection process. On the panel, 56 senior Advertising, Marketing, Media, PR and Digital industry experts and thought leaders were deployed by Ad Club. “We are the only Indian Ad Club using a sophisticated Online Jury Process. Every jury member scores independently based on the facts presented in the Entry form. No jury member knows who else is in his group and the identity of the entrant”, explained, Arvind Kumar, Executive Director of The Ad Club Bangalore.
The Advertising Club Bangalore is one of the few ad clubs in India which has been successfully conducting workshops, seminars, professional talks, sports events and the BIG BANG awards for excellence in communication and media. The club uses a State-of-the-Art Online Platform in association with Global Best Awards of USA to receive, collate and judge entries online, on par with other International awards.
Posted by editor-manu-sharma at 7:45 PM