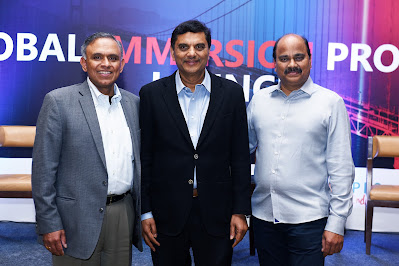 India has emerged as the third largest ecosystem for technology startups globally,  Milpitas-based, FalconX a startup incubator founded by a team of nine successful entrepreneurs and industry leaders has identified  two startups founded by Indians which they believe have the prospects of entering into the exclusive billion dollar club.  Since inception in 2017,  the US-based tech accelerator has powered many newfangled ideas, new-generation products and futuristic business models to nurture.

After funding and mentoring, global startups in the San Francisco Bay area for many years, FalconX is now eyeing Indian born tech startups.

Speaking exclusively to the media,  BV Jagadeesh, a Founder of FalconX and  the Managing Partner at KAAJ Ventures says, "The growth of India's tech startup has not only mainstreamed entrepreneurship but also led to a boom in the local venture capital industry and global incubators such as FalconX. We are a B2B tech accelerator for startups who want to globalize, take their product/service overseas in order to help  startups in other geographies to transform themselves  into the path of success."

Presently out of the 45 odd startups, we have raised funding for so far, Jagadeesh, says eight of forty five startups are already valued between US$100-$500 million and of these two startups - Quantela Inc  and Tetrate - are most likely to emerge as Unicorns i.e. join the billion dollar club during 2022

Quantela Inc., headquartered in the USA, with a presence in Europe and Asia, It is a smart city enabler that makes cities more liveable and sustainable for  its citizens. It does so by helping city administrators with its AI-powered platforms that deliver outcomes such as reduced energy consumption and CO2 emissions; improved traffic flow, water and air quality; optimization of waste collection and management; better public safety through crisis management; increased revenues through asset optimization like parking spaces, and reduction of operating and maintenance costs. Sridhar Gadhi, the founder at Quantela Inc.,  is a global leader in the space of urban infrastructure digitization with its outcomes-focused technologies deployed in over a 100 smart city projects across the Americas, EMEA, CIS, India and APJ markets. It helps improve livability of citizens, operational efficiency, resilience and sustainability in those cities.

Tetrate,is a company commercializing an open-source networking project that allows for easier data sharing across different applications. It is an enterprise-ready service mesh for any workload in any environment. Tetrate's service mesh platform makes it easy for DevOps, security, and network administrators to manage the complexity of modern hybrid cloud application infrastructure. It was founded by Varun Talwar CEO and co-founder and also the co-creator of Istio and gRPC. He started Tetrate with Jeyappragash Jeyakeerthi, who previously led Twitter’s Cloud Infrastructure Management Platformand his  experience will be invaluable as will take Tetrate to the next level of growth and success.

Unicorn is a term used in the venture capital industry to describe a privately held startup company with a value of over $1 billion. And several factors have triggered the unicorn rush during the pandemic. "While work from home during the pandemic fueled the growth of digital businesses, mainly three factors, a thriving digital payments ecosystem, large smartphone user base and digital-first business models, have come together to attract investors. Tech companies, are contributing to the unicorn boom, Besides fintech, e-commerce grocery, SaaS and marketplace players are contributing the most to the unicorn universe., says Jagadeesh.

Murali Chirala, with over 20 years of technology and product leadership in FinTech, Cloud and Security,  is an active advisor and mentor at FalconX. He says "India aspires to become the largest startup ecosystem in the world, and incubators like FalconX are helping accelerate India's growth story.  We have partnered with several venture capitalists including private equity companies - Mayfield, Norwest Venture Partners, Matrix Partners India and others major global VC's. In fact, we also partner with T-Hub,  an innovation intermediary and business incubator based in Hyderabad. "Based on the triple helix model of innovation, it is a partnership between the Government of Telangana, three academic institutes in Hyderabad and the private sector.,: he adds.

FalconX since inception has mainly focused on startups in the areas of Fintech, Cyber Security, Cloud & Infrastructure, Machine Learning & Artificial intelligence, Energy - green and renewable, Health Tech, Smart Cities and Life Sciences. "About 40% of our funded startups are in the cloud and infrastructure and cyber security space while  60% comes from Healthcare, Energy, Storage and Smart Cities, says Chirala.

"Despite the slow down due to the pandemic, over the last 2 years, all our startups have had great success in the Bay area and are likely to see similar success in India too and 2022 will be the break even year" concludes Jagadeesh.

Posted by editor-manu-sharma at 11:48 AM