Witness Bhoots With Humans in Uunique Show “Happy & Pinaki- The Bhoot Bandhus.” on SONIC at 11.30 am 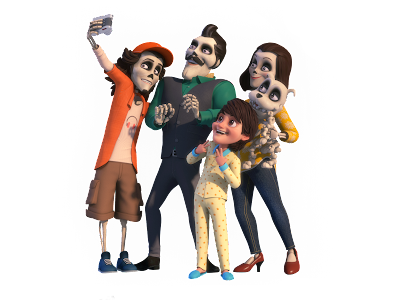 Bedtime stories have been a significant part of all our childhood! While we all have lived through those amazing tales, the ones etched in our memories are the spooky tales that are a perfect combination of thrill and comedy. Revisiting the charm of spooky-comedy, Nickelodeon, the leading kids’ entertainment channel announced the launch of its new animated show today – Pinaki & Happy: The Bhoot Bandhus. The show premieres on 9th November 2020 at 11:30 AM on Sonic.

Taking the kids into a new world of fun, the show will portray unusual family of ghosts, who adopt the central character of the show – Pinaki and raise him as one of their own. The high-octane fantasy series will take the viewers on a laughter ride with mysterious adventures of Pinaki and Happy, followed by a series slapstick comedy combined with some Bhootbaazi as they try to fit the bhoot world in the real world. His daily adventures or ‘Bhootbaazi’ with his partner-in-crime, Happy, a 19-year-old funny ghost, makes for an unusually entertaining watch The show is directed by Ankur Chauhan. Legendary Gulzaar saab has once again scripted lyrics for the title track of the show and the music created by Simaab Sen.

The Bhoot Bandhus, is another edition to the long list of memorable homegrown characters like Motu Patlu, Rudra and Shiva to name a few, that Nickelodeon has been entertaining kids all over India with.

Watch the comedy unfold when the Bhoot World meets the Real world only on Sonic from Monday-Friday at 11:30 AM.

Nickelodeon India has established itself as a thought leader by being the No 1 franchise in the kid’s category with a household availability in about 120+ million households across 8 languages. The franchise boasts of a bouquet of channels like Nick, Sonic, Nick Jr and Nick HD+ catering to kids across all age groups from Tots to Teens. The franchise today has the largest original content library in the country with over hours of content and plans to add over 200 hours this year. The franchise is a home to the most legendary iconic characters like Motu Patlu, Rudra, The Golmaal Jr, Pakdam Pakdai and Shiva on Nick and Sonic; and Dora The Explorer, Paw patrol , Peppa pig on Nick Jr and marquee international properties like Loud house, Kung-fu-panda, Avatar, Penguins of Madagascar etc on Nick HD+. The channel continues to engage and entertain kids across India through large scale experiential formats, consumer product range and with digital and online presence.

Posted by editor-manu-sharma at 1:42 PM