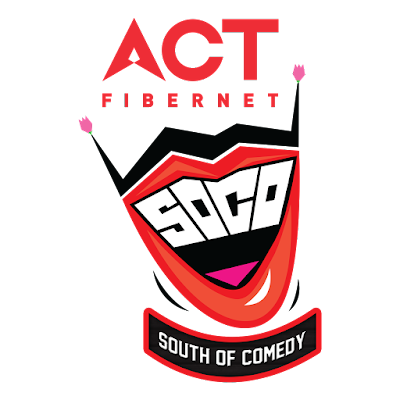 The stand-up comedy art is increasingly gaining popularity in Chennai. Having produced home-grown talents like Karthik Kumar, Arvind SA, Alexander Babu with global recognition from Indian diaspora, Chennai is transitioning into one of the preferred destinations for high-quality stand-up comedy. EVAM, Chennai’s biggest theatre and arts platform has been driving the standup comedy movement in South India for the last 9 years enabling people to discover their calling.  South of Comedy (SOCO) is a one of a kind initiative by the group aiming to provide a dedicated platform to stand-up comedians and further cultivate the comedy culture in the city.

South of Comedy (SOCO) aspires to be a one stop source for audience to catch all their favorite stars and enjoy fun curated events all seven days a week. It will also act as a stage for upcoming comedians to showcase their skills and entertain the local audience.

ACT Fibernet, through this partnership intends to promote the comedy circuit in Chennai and will provide an exclusive “ACT Fibernet SOCO” branded venue for continued entertainment and engagement. Further, as the company’s new brand promise #Advantage Entertainment, ACT Fibernet and EVAM together will host dedicated nights once in a month exclusively for ACT customers giving them a better dose of comedy.

Speaking on the partnership, Sandeep Gupta, COO, ACT Fibernet said, “Stand-up comedy is extremely becoming popular in Chennai especially among the millennials. EVAM has been driving the movement for last 9 years and we are excited to partner with them for their new venture. Together, we aim to deliver top class entertainment and generate opportunities for new talents”.

Commenting on the partnership, Sunil Vishnu K, Director, EVAM said, “ACT Fibernet is one of the most reputed broadband service providers in Chennai, and we are delighted to have them on board as our partner. ACT Fibernet will play a critical role in providing our customers world-class experiences and we hope together we will revitalise the comedy culture in the city.”
Posted by editor-manu-sharma at 6:46 PM