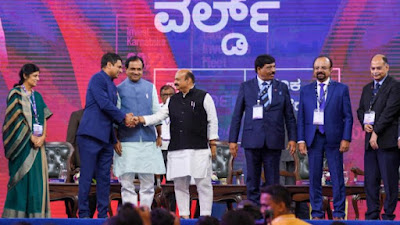 * Do not use the MoUs as a tool to influence markets. Commitments are to be honoured, the Chief Minister said at the finale of the State’s three-day Global Investors’ Meet

Karnataka is able to see the silver lining among dark clouds even as the world in is reeling under recession and leading economies in particular are trying to meet both ends, said Chief Minister Basavaraj Bommai here on Friday.

Karnataka put a foot forward and showed courage when the whole world was reeling under recession, inflation was on the rise, and the top world order countries were suffering and trying hard to meet their financial requirements, he said at the finale of the State’s three-day investment exposition, Global Investors’ Meet (GIM).

He thanked investors for favourably responding to the State’s call for investment. “Times are challenging, but trust is an important factor,’‘ Mr. Bommai said. “Our strength is our people, talent, our policies, and tech-driven industries,’‘ he added.

The Chief Minister said this edition of GIM resulted in the signing of MoUs involving Rs 9.8 lakh crore (over $100 billion). This has been cleared under the State’s single-window clearance agency and high-level committee. However, how much of it would eventually convert to investments on the ground is critical. Of this, a chunk of Rs 2.83 lakh crore has already been cleared, he said.

Addressing investors, he said, “Do not use these MoUs as a tool to influence markets. Commitments are to be honoured. If you are ready to take the challenge, we will be with you. Within three months, these MoUs should become investment reality.’‘

On renewable energy initiatives Mr. Bommai said that Karnataka accounted for 63% of the total production in the country. “We are going ahead of the Gulf countries in terms of producing ammonia and green nitrogen based energy sources. I want our first hydrogen-based renewable energy project groundbreaking by February-March next year.’‘

Posted by editor-manu-sharma at 2:45 PM