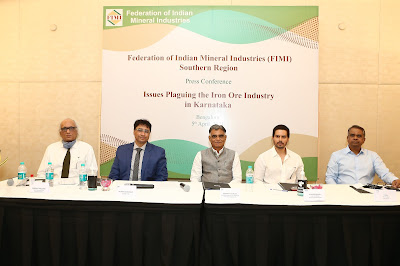 * Karnataka state loosing close to Rs.8000 Cr. revenue per year due restrictive trade practices while the rest of India is exporting iron ore as per the EXIM policy of Government of India.

* Karnataka Iron Ore industry has a massive potential to drive Socio-Economic Development and create huge employment opportunities in the state, with relevant policy amendments to boost the industry.

The Federation of Indian Mineral Industries (FIMI), Southern region seeks intervention of the central and state governments for the removal of various restrictions imposed exclusively on iron ore trade in the state of Karnataka.

Karnataka is the only state in India where the miners have no commercial freedom to sell their product, where entire ore has to be sold through institutionalized e-auction to parties meeting eligibility criteria- domestic end users. It is also the only state from where export of iron ore and pellets made from Karnataka ore is prohibited.

However, there is no corresponding requirement on the eligible purchasers to exclusively source from e-auction. Even though there is adequate supply of Karnataka ore which for the current financial year will be around 45 Mil tone against Demand of around 36 Mil Tone,  there has been consistent and substantial quantities imported from other states as well as abroad every year, tipping the balance and pushing the iron ore industry into duress. Owing to above non-level playing field in terms of trade restriction where the miners can only sell the material domestically, without any alternate market for sale, the prices in Karnataka are subdued and the Karnataka iron ore is being sold at ~$50 in  as against ~ $140 internationally.

The various rigorous conditions which are now strangling the iron ore industry were imposed by the Hon’ble Supreme Court in 2011 through order in the WP filed by an NGO-Samaj Parivatana Samudaya. The Hon’ble Court provided the rationale that such stringent measures were required to redress the extraordinary situation which existed then and to give time for the authorities to establish systems for monitoring. Central Empowered Committee-the commission of Supreme Court- itself has recommended to Supreme Court that these conditions have served its purpose and it is time to revisit the same.

While the strict conditions have weeded out the illegal elements and established robust monitoring systems, perpetuating the requirement for e-auction of iron ore by Monitoring Committee and prohibition on export of iron ore and pellets are causing sustained loss to state exchequer, and hindering development of minerals and socio-economic development of mining areas. Hence FIMI has requested concerted efforts from Central and State government and other stake holders to restore freedom of trade for iron ore lessees in Karnataka.

As per estimates, the gross loss over a 5-year period to the State of Karnataka is approximately INR 30000 crores due to E- Auction mechanism with restrictions on sale of Iron Ore outside the state and Exports. Incidentally, the suppressed prices are a double whammy since it leads not only to lower royalty and other levies to the state but also reduces the bid premium on ore extracted from recently auctioned captive mines which is over and above the stated loss herein.

It is interesting to note that these discriminatory policies are specific to Karnataka state whereas rest of the India (including Goa and Orissa) is allowed to trade freely as per the EXIM policy of Government of India thereby ensuring fair revenue to the State Exchequer including foreign exchange as well as overall growth of the nation.

As per the data available, the total export in the year 2020-21 from other parts of India is ~40MMT whereas despite of having such a high quality Iron ore resources, state of Karnataka is struggling to realize the true potential of Iron Ore Industry.

The misery of the Iron Ore Industry is, while there are restrictions on the free trade of Iron Ore, on the other hand steel makers from the state have all the liberty to source Iron ore from any other region of the country & even import from other countries in addition to ever increasing captive mines acquired in the past leading to market monopsony.

FIMI Southern Region also raised concern over non-utilization of special fund under DMF & SPV. The mining sector contributes almost 35% of its income to state exchequer as royalty and various levies. The iron ore mining fraternity in Karnataka in past 6 years has contributed around 2336 Cr. to DMF Fund and a corpus of around 18000cr is accumulated under SPV. These funds ear marked for socio-economic development for the community. Appropriate steps should be taken by the State govt. to use the unutilized funds on development of the infrastructure & livelihood in the mining belts and surrounding districts.

Earlier, FIMI Southern Region had written to Ministry of Mines GOI appealing to take appropriate steps and urgently submit necessary facts before the Hon’ble Supreme Court, in order to rectify the gross imbalance that has arisen due to the prohibition on free trades and seek urgent rectification of the situation by permitting export of iron-ore from Karnataka. FIMI had also written to the state government seeking its intervention to restore normalcy in Karnataka for ease of doing business by the Mining sector. FIMI acknowledges and thanks Hon'ble Minister of Mines & Geology, Mr. Murugesh Nirani for their intention to file an affidavit in Supreme Court in support of export of iron ore.

Mr. Sauvick Mazumdar, Member FIMI, Southern Region added "We are thankful to the Hon'ble Minister of Mines & Geology , Karnataka for considering the issues related to Karnataka Iron Ore Industry. Karnataka Iron Ore industry has the massive potential to drive the growth. The lower price for Karnataka Iron Ore and restrictions on the trade is also drastically reducing the contribution towards DMF and other community development activities in the state of Karnataka. It is very important to bring in suitable policy reforms to enhance the ease of doing business in the state of Karnataka, which will be in line with the larger vision of our Prime Minister to make $5 Trillion economy by 2024."

"Karnataka Iron Ore Mining industry is struggling and there are chances if this unfair trade practices continue many Iron Ore industries may exit from the state which could result into massive direct & indirect employment loss" added Mr. Basant Poddar, Ex- Chairman, Southern Region.

He further added Karnataka has adequate stocks of Iron Ore but steel makers from Karnataka inclines toward importing Iron ore from other regions. There should be no apprehension about shortage of Iron ore in Karnataka and its free trade should be allowed to realize the dream of making India a global economic powerhouse.

The Federation of Indian Mineral Industries (FIMI) is an all-India apex body established in 1966, to promote the interests of mining (including coal), exploration, mineral processing, metal making and other mineral-based industries. The body works towards promoting ‘Mine in India’ for ‘Make in India’, commitment to socio-economic growth and improving lives in remote mining regions, leading the sustainable mining movement in India, transforming geologic possibilities into mines of wealth and honing India’s mining skills.

Posted by editor-manu-sharma at 3:43 PM