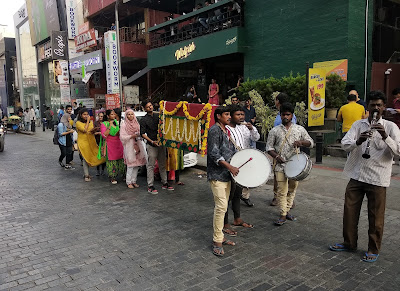 Child Rights and You (CRY) a leading ‘rights’ based organization working in the domain of child rights for the last 40 years organized a unique campaign to sensitize the netizens of Bangalore on the prevalence of child marriage. The event called ‘Not Yet’ saw a ceremonial wedding procession where people were asked to attend the marriage of a young girl representing the truth of 653131 married girl child in the state of Karnataka.

The latest Census figure shows the percentage of married children increase steeply with increasing age, and the increase is much more for girls than boys. At the age of 15 only 2.2% of the married population are boys while 8.6% are girls; this for the boys in the age of 18 becomes 3.6% and for girls is 27.45 % indicating the steep rise. Today’s girls are tomorrow’s women. Young girls who get married at an early age face several health related problems and lie at a greater risk of infant and maternal mortality.

The event marked by the presence of around 20 CRY volunteers and staff dressed up as attendees of a wedding procession escorted a Palki signifying a bride sitting in it. Mock invitations were given out asking people to join the ceremony. The invitation contained information on child marriage sensitizing people on the ground reality and also provided information on how common people can support the cause.

“The surprise factor was very impactful. It reminds us of the sad truth about the society that we don’t give importance to. The manner in which the complexity of the issue was sensitized to us motivated us to be part of CRY’s effort in its work towards to bring a sustained change in the lives of children,” said one of the onlookers, Arkadeb Ghosh, working in an analytical firm.

“Through this event we wanted to inform the general public and draw their attention to some of the serious threats the girls of our country are facing. The importance of school for a girl child is much more than education as being there for the prescribed period also and averts them from instances of child marriage and child labor,” said Karthik Narayanan, Regional Director CRY (South).

CRY:
Child Rights and You is an Indian NGO that believes in every child’s right to a childhood - to live, learn, grow and play. For 4 decades, CRY and its 850 initiatives have worked with parents and communities to ensure Lasting Change in the lives of more than 2,000,000 underprivileged children, across 23 states in India.
Posted by editor-manu-sharma at 7:02 PM