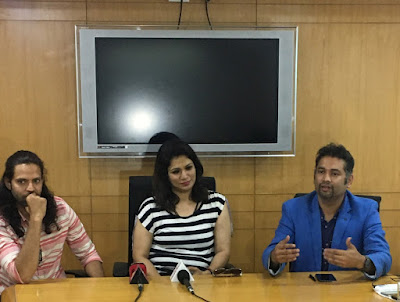 Fifteen students of LISAA School of Design, a premier fashion school  & CREO Valley have been selected by Director Prashant Ranganath from Bakeflicks for the upcoming debut movie Gully 7  during a campus placement drive at LISAA School of Design today.  The film is about the story on Vinayaka, ayoung man who walks with a dream to make cricket and its spirits felt across the globe. He drives inspiration from his mentor/coach to achieve many milestones.

“Bakeflicks is coming up with a film based on cricket. Being an ardent follower of cricket and an educationist, I am delighted to see the zeal  which students have appeared for campus recruitment opportunity offered by Bakeflicks,” says Girish Keswani, Director, LISAA School of Design. He further added, “With the technical and conceptual skills we impart to our students I am confident these students willadd lot of value to the  Gully 7 film during pre-post and during production of the film.The fact that the film is based on cricket has definitely created a buzz on our campus!!” Avi Keswani,Director, LISAA School of Design, says “We have always been confident of our curriculum and pedagogy at CREOValley School of Film and Television and LISAA School of Design. It's great tosee that Mr. Prashant from Bakeflicks has expressed keen interest in not only Film Making but our Design students as well.”  “It is days like these we at CREO Valley school of Film and Television always look forward to, where we have an opportunity to put our students’ in front real world production requirements and see how well they grab the opportunities. It is heartening, to see a good number of students being picked for various production roles for the upcoming production of Bake Flicks, the "Gully7", says Mr. Rajiv Ganesan, Headof Department, LISAA Film Making.

“Though the curriculum at CREO Valley is very comprehensive, there are some skills that can be acquired only by exposing the students to an actual production that has deadlines and deliverables. We are very happy to collaborate with Bake flicks in giving students the valuable exposure and wish to thank Mr. Prashant and his team for choosing CREO Valley for this collaboration,” he added.

It was set up in India in 2013 with state-of-the-art infrastructure and campus in Bangalore. LISAA - Bangalore is owned and operated by CREO Valley, the school of creativity and innovation recognized by Qualifications & Assessments International (QAI), UK, Federation of European School (FEDE) and Jawaharlal Nehru Technical Education - Council of Skill Development (JNTE) in higher education. LISAA School of Design has a multidisciplinary approach to design education that promotes both creativity and experimentation, studying and learning in this environment helps the students to develop a unique perspective. LISAA Bangalore is recognized by the University in Bangalore to offer Degree Courses in Fashion & Textile Design, Interior & Product Design and Graphic & Web Design. It also offers Student Exchange program with more than 7 other locations in France. About the Director Prashanth is also the Founder & CEO of Tingg Creation. Prashanth’s association with theatre, television & cinema goes back to 2004.

He started off co-directing TV shows, managed complete production for theater plays, was part of the pre-production phase for a few films & promotional stage for several others. As a passionate pursuer of cinema, he completed his masters in Mass Communication from Mysore University & represented one of the leading universities in the country as part of a study tour to Universal Studios, USA.He was a part of the acclaimed event ‘100 years of Indian Cinema’,where he & his team launched a magazine about various facets of movie production. He moderated a panel discussion & set the tone for the discussion on ‘Future of digitization in Films’ in the ‘10th Bengaluru International Film Festival 2018’. After the valuable learnings fromUniversal Studios & priceless experience in the media industry, he is devoted to producing quality cinema.
Posted by editor-manu-sharma at 3:08 PM