Bengaluru Tech Summit Celebrates Innovation in Both IT & BT 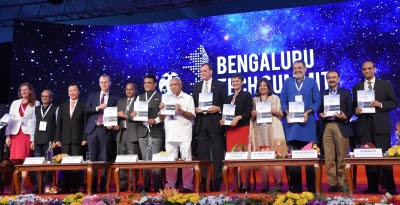 Bengaluru Tech Summit has taken off giving a big boost to innovation in IT and also biotechnology. The event is perceived to be a platform to present the entrepreneurs to the world. The event organized by the Karnataka government will focus on Artificial Intelligence (AI), impact of Blockchain and IoT, cyber security, space and drone revolutions, electric vehicles, 5G, genomics, trends in agriculture, smart therapeutics, biotherapeutics and smart immunologics in cancer care.

The three day event which is held from November 18 to 20 at the Bangalore Palace has participation of 21 countries as against 12 nations last year. These include UK, Netherlands, Australia, Finland, Vietnam and Lithuania.

Addressing reporters CN Ashwath Narayan, Karnataka’s Deputy Chief Minister and Minister for IT, BT and S&T said, “One of the new additions this year is the robotics competition – R2- RoboRecharge Robotic Premier League. Students from all over the State will be a part of the biggest robotics championship to be held in India.”

Kiran Mazumdar-Shaw, chairperson Vision Group on biotechnology said that in 2015, biotech sector in India was envisaged to be $100 billion by 2015. "What we meant by a bio-economy was that it was technology-driven biosciences business that would be able to provide the much needed efficiency to the companies’ growth. We are already $51 billion bio-economy in 2019."

She said that the gorowth in this industry has happened because Bengaluru has been always inclined to prove its expertise in scientific research and related academics. The city is home to research centers of excellence in science. This has resulted in development of advanced  scientific talent pool which Bengaluru has taken advantage of. Further it houses the largest base of first generation entrepreneurs who are technology driven."

In the biotech sector too, the city is known for its capability in not just drug development but diagnostic technology. There are 3,900 start-ups in this space and 900 came up in the last one year. It is important to note that the biotech sector is highly capital intensive and not like the information technology sector. It has attracted technology like artificial intelligence, blockchain, machine learning all of which is utilized in diagnostics which is useful to make faster disease detection.

Kris Gopalakrishnan, chairman, Vision Group on Information Technology, said that the event has been able to sustain itself because of investment in talent. There are many opportunities with technology spanning from blockchain to genomics. Progress on these fronts have happened only because Bengaluru is a research and development hub. "We need to sustain and grow in Karnataka and showcase to the world the expertise in technology from this state."

Over 3,000 delegates including 240 from abroad have confirmed their participation; 200 speakers; 200 start-ups and SMEs and 250 exhibitors are taking part at the summit.
Posted by editor-manu-sharma at 7:07 PM