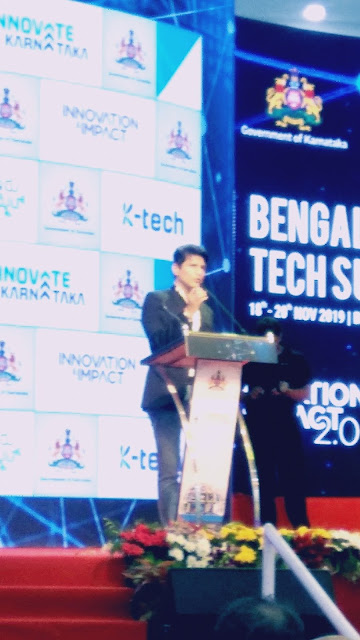 On Day 2 at the on-going Bengaluru Tech Summit (BTS) 2019, Gadgetguru and Tech Anchor - Rajiv Makhni anchored a technology session 'Innovation & Impact with Rajiv Makhni' to a large range of audience. In the interactive session, he spoke about how innovation should not only be a wow factor but a disruption benefits the world. Also highlighted the advantages and disadvantages of the new Foldable phones being unveiled.

Makhni says, “More technology has come into this world in the last five years than since the beginning of time.” He also educated the audience on the Indian stereotypes and myths saying, “India is considered as a feature phone market, but there are only 500 million users of smartphones which is 59% of the current population which means that 49% of other Indians use feature phones.

There is a huge misconception that India is a voice only Android market but we need to remember that there are also 13-15 million iPhone users in India. India has moved from one of the lowest users of data to one of the highest in the world today. Currently an individual uses an average of 15 GB of data a month says Makhni.

on the new Samsung Foldable phone being unveiled in India, Makhni asked a number of audience, if they would like to own a mobile which is a size of a pen but can be unfolded to a 6.4 inch tablet. "Take a phone out from your pocket. It has, by current standards, a really small screen. About four inches or so. You unfold it once. It’s become a 7.3-inch tablet-like screen. Unfold again. you’ve now got a 15-inch laptop screen. One more unfold and it’s a massive 32-inch TV. Well, the first part of this unfolding dream has been achieved. The Samsung Fold is here with a screen outside that unfolds once to a 7.3-inch screen. And with that, the world of mobile phones and all other devices changes forever."

It’s not easy to describe the fold experience but one should have a deep pocket of US $2,000 to buy it, concludes Makhni.

The interactive session was followed by a Talk with Mark Cohon, Chair, Toronto Global, Canada.
Posted by editor-manu-sharma at 10:41 AM