Recession the Best Time for An Organisation to Grow, says Jason Jennings at BFW’s Manufacturing Day 2019 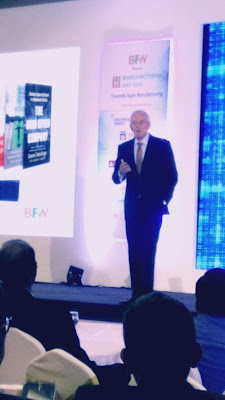 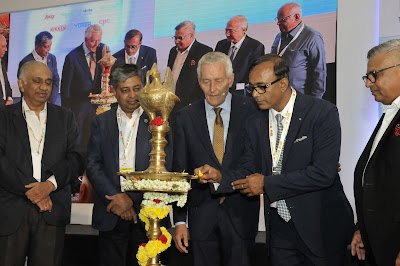 Bharat Fritz Werner Ltd (BFW), a leader in the manufacturing sector in India, organised the Manufacturing Day 2019 with the theme “Towards Agile Manufacturing”. Mr. Jason Jennings, an eminent international speaker and an Authority on Leadership, Growth, Culture & Innovation, delivered the keynote address titled “Innovation & Reinvention with focus on Manufacturing”.

Mr. Jason Jennings shared the wealth of his knowledge he acquired over many years researching for his bestselling books. He screened more than 220000 companies studied more than 80000 companies and interviewed more than 18000 CEOs, MDs, Owners and Highly successful entrepreneurs. Based on his learning he enumerated 6 leadership secrets of the best agile and people driven companies in the world.  He said that these companies are purpose driven built around doing well by doing good, they exist to grow so as to attract and engage with the right people, they are not afraid to let go of yesterday’s bread winners, they make a lot of small bets, they simplify and systematize everything and these companies are led by good stewards.

Mr. Jennings said that in most developed nations manufacturing contributes to about 50% of GDP. In India this number is just 15%, by boosting manufacturing’s contribution to 25% as envisioned by the government, millions of families will acquire middleclass status, bringing India on par with China and making the country an economic superpower.

Mr. Jennings advised the vast gathering of CEOs and decision makers to spend a minimum of 50% of their time talking to customers as this would bring them in tune with every strata of business. He said that recession is not to be feared as it is the best time for a business to grow. According to him letting go of people during an economic slowdown is bad for an organisation as it releases a great knowledge base that the company will require when the economy picks up.

In preparation for BFW’s Manufacturing Day 2019, Mr. Jennings interviewed 32 Indian CEOs across industry verticals to understand the prevailing business environment in India. Based on his findings, Mr. Jennings keynote address is customised to assist Indian industry in a global scenario.

Jason Jennings is a researcher and one of the most successful and prolific business authors in the world. The more than 1,200 motivating and inspirational keynote speeches and seminars he’s delivered around the world have consistently and positively changed lives, careers, and companies forever.

He travelled the globe in search of the world’s fastest companies for his landmark book, It’s Not the Big That Eat the Small – It’s the Fast That Eat the Slow and, within days of its release, it hit the Wall Street Journal, USA Today and New York Times Bestsellers Lists, USA TODAY named it one of the top 25 books of the year and it was eventually published in 32 languages.

Mr. Jennings and his research teams identified the world’s ten most productive companies for the bestseller, Less Is More. That was followed by, Think BIG – Act Small, which profiled the only ten companies in the US to have organically grown both revenues and profits by double-digits every year for ten consecutive years. His book, Hit the Ground Running – A Manual for Leaders, reveals the tactics and strategies of the ten new CEO’s who created the greatest amount of value during their first five years on the job. His New York Time’s bestseller, The Reinventors – How Extraordinary Companies Pursue Radical Continuous Change, reveals the secrets of those leaders and organizations that have successfully reinvented and transformed themselves. His latest book for his publisher Penguin Random House is, The High-Speed Company – Creating Urgency and Growth in a Nanosecond Culture.

Mr. Jennings’ books are consistently described by critics as, “extraordinarily well researched, insightful, crisply written, accessible, intriguing and a vital resource for everyone in business.

USA TODAY has called Jason one of the three most in-demand business speakers in the world. Jennings is well-known for the exhaustive research that goes into customizing every speech or workshop that he delivers. Before taking the stage, he’s poured over every bit of information available about the company, will have spent time interviewing the CEO or business owner and conducted another dozen telephone interviews with other leaders within the firm.

In preparation for BFW’s Manufacturing Day 2019, Mr. Jennings interviewed several Indian CEOs across industry verticals to understand the prevailing business environment and come up with a prescription to help Indian companies in a global scenario.
Posted by editor-manu-sharma at 8:00 PM