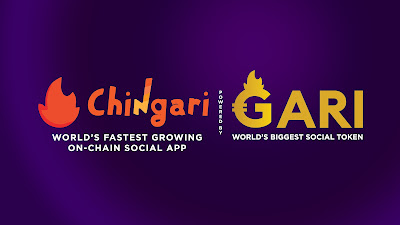 World's largest social token, GARI has surpassed the milestone of 1 million active wallet users. The historic feat has been achieved in less than six months of its integration into the Chingari app. As the active wallet users have crossed more than the 1 million mark, the GARI token has now become the fastest on-chain social app to hit the milestone. GARI is the native token of the short video app, Chingari which is a leading web3 social network with a combined community of 140+ million users.

Mr Sumit Ghosh, Co-founder & CEO, Chingari said, “This is a historic moment as GARI token has now become the fastest on-chain social app in the world to achieve this milestone. The 1 million GARI active wallet users are a testament to the faith the community has shown in our project. Moreover, this feat will make our resolve stronger to empower the big and small content creators on the Chingari app through the GARI mining program. We are on the path of onboarding 1 billion on-chain users and confident that we will achieve the feat  in near future.”

Chingari launched the GARI mining program in June 2022, which incentivises participants (users and creators) on the app for doing in-app activities like uploading, watching, sharing, and liking videos. In less than two months more than 1.5 million USD worth of GARI has been awarded to the participants just for engaging with the app.

Chingari, powered by GARI is the world’s fastest-growing on-chain social app launched in 2018. The home-grown app has emerged as the one-stop destination for entertaining, engaging videos across diverse categories such as dancing, singing, transformation, innovative skills, etc. Chingari has 5 million Daily active users (DAU) and 40 million Monthly active users (MAU). With 163 million downloads, it is amongst the top 20 most downloaded apps globally, in 15+ languages.

Gari token is the World's biggest social token. Chingari’s native token, GARI enables short-form video creators to monetize their content on the Blockchain with the GARI token. Gari token has received great enthusiasm from the community with 1 million active wallet users in just 6 months since its launch. GARI token has become the top 3 Projects on the Solana blockchain in terms of the number of holders.

Posted by editor-manu-sharma at 5:56 PM