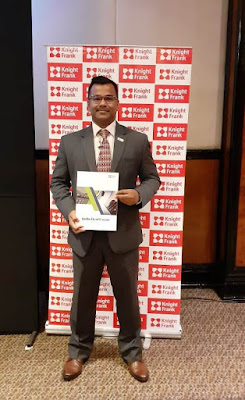 Knight Frank India has launched the 11thedition of its flagship half-yearly report - India Real Estate. The report presents a comprehensive analysis of the residential and office market performance across eight citiesfor the period January – June 2019 (H1 2019). The report findings establish that the number of residential launches in Bengaluru increased by 34% in H1 2019 to 20,894 from 15,556 in H1 2018. The housing units sold increasedby 9%YoY in H1 2019 to 28,225.

·         As the northern belt witnesses increased leasing of ofﬁce space and infusion of new ofﬁce stock, supply in the primary residential market is also increasing in tandem. In H1 2019, North Bengaluru accounted for 28% of overall launches compared to only a 12% share in H1 2018.

·         From 25,803 units in H1 2018 to 28,225 units in H1 2019, sales have increased by 9% YoY. In H1 2019, sales volumeswere robust in the ﬁrst quarter (June –March) of 2019. However, the sales momentum slowed down in the April–June quarter.South Bengaluru noted the maximum proportion of overall sales with a 42% share with locations such as Kanakpura Road, Electronic City and Sarjapur garnering good sales velocity.

·         New launches in the less than INR 2.5 million category were noted at 18% in H1 2019. Compared to the year-ago period, when this ticket size accounted for only 4% of total new launches, this is a substantial increase in both unit and percentage terms.

·         Ready-to-move in inventory, the right price tag and rationalisation of the GST levy for under-construction properties led to a 14% decrease in the unsold inventory at a city level.

Shantanu Mazumder, Senior Branch Director, Bengaluru said “Ready-to-move-in inventory, the right price tag and rationalisation of GST levied for under-construction properties are the primary reasons for the residential market to bounce back. Steady sales volume has been instrumental in reduction of unsold inventory successively over the past 1.5 years and the same trend continued in H1 2019. The enhanced interest deduction upto INR 3.5 lakhs for purchase of an affordable house valued uptp INR 45 lakhs should provide a boost to the demand from middle class homebuyers for smaller ticket sizes in northern and southern peripheral locations of Bengaluru, mainly along the upcoming metro corridors.”

·         Of the total ofﬁce space leased in H1 2019, Outer Ring Road accounted for 30% share, the highest of the total pie However, due to low vacancy levels, the leasing share of this micro-market has reduced and the demand spillover is being absorbed by other micro-markets.

·         The Peripheral Business District (PBD) East constituted 21% of total ofﬁce space leasing in the H1 2019 period.  From an 11% share in city leasing in H1 2018, the share of this micro-market has increased substantially due to resurgence of occupier demand in this belt as the metro construction work progresses. Tenants are flocking to lock long-term leases in PBD East to take the advantage of lower rentals while they still can as once the Metro will become operational, office rents are expected to increase.

·         Apart from Outer Ring Road and PBD East, the Suburban Business District (SBD) accounted for a whopping 20% of overall leasing in H1 2019. On a YoY basis, leasing in SBD has increased by a massive 86%.

·         Co-working constituted for a 20% share in overall leasing in H1 2019. In a bid to augment existing co-working infrastructure, many co-working operators are leasing multiple spaces in Bengaluru’s prime business hubs to cater to multinational corporations’ (MNCs) mixed portfolio strategies of fixed and flexible workspaces.

·         Manufacturing and Banking, Financial Services and Insurance (BFSI) accounted for 8% and 6% share, respectively. Other Services sector accounted for a cumulative 38% share in overall leasing volume.

Shantanu Mazumder, Senior Branch Director, Bengaluru said “The H1 2019 period has been a very signiﬁcant one for new supply infusion in Bengaluru as the city witnessed the highest ever volume of new completions since the past nine years. The remarkable performance of Bengaluru's ofﬁce sector bodes well for upcoming periods and with a huge supply pipeline with expected completions in the next three years, the strong momentum of ofﬁce space leasing should continue. PBD East is a micro-market to watch out for as upcoming metro completion has led occupiers to reconsider expansion in this belt and office space consumption in locations around Whitefield and Brookfield has been increasing steadily.”
Posted by editor-manu-sharma at 8:27 PM