Rohini Nilekani,Gates Foundation and Sattva Unveil Flagship Report on the State of ‘Everyday Giving in India’ 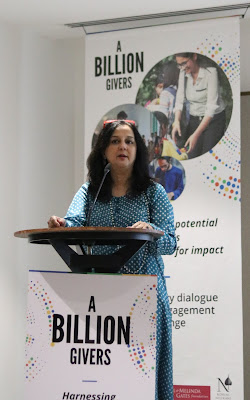 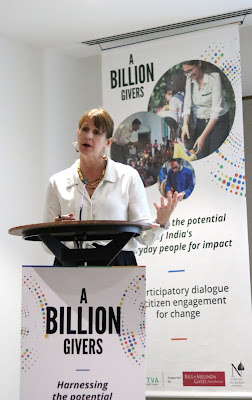 Rohini Nilekani, renowned philanthropist has today launched a flagship report on the state of ‘Everyday Giving in India’. The research was undertaken by Sattva Consulting, a well-known  social impact consulting firm, in association with Bill & Melinda Gates Foundation and Rohini Nilekani Philanthropies.

This report is a first-of-its-kind 360-degree mapping of the market, solutions, innovations, challenges and opportunities in “everyday giving” in India—i.e. the ways in which India’s ordinary citizens give their money and time, and engage with social causes. The report has been prepared through a comprehensive market estimation process along with conversations and surveys with key players, experts, individuals and charitable organisations. This report is based on the research study conducted between September 2018 and March 2019 and examines the state of everyday giving in India to understand what it would means to unleash the full brain, muscle and financial power of India’s everyday givers to propel the country’s social development.

One of the study’s biggest findings is the comparatively small percentage of India’s everyday giving that goes towards NGOs. Only INR 3.5k crores goes to NGOs, making it a mere 6% contribution to total philanthropic giving in India.

The report launch was followed by two insightful panel discussions on “Strengthening our citizenship muscle: Everyday giving in a participatory democracy” & “Innovation and growth potential of the formal everyday giving market in India”.

The panel discussions highlighted various themes around everyday giving and the ways of harnessing the potential of India’s  billion givers to enable and support the country’s social development. The conversation also brought up the subject of how everyday giving and citizen engagement can be leveraged as a powerful instrument in the best possible way to overcome key social challenges of the country.

While discussing the need of streamlining philanthropic giving, Rohini Nilekani, Co-founder of Rohini Nilekani philanthropies said, “This carefully researched report shows us that the giving muscle in India is well-exercised, but could do with some protein shake! In fact, the research tells us that with some streamlining of efforts, India could emerge as the hub of innovation around everyday giving. The report details many recommendations for all sections of society – samaaj, bazaar and sarkaar. We hope this will help many more people and institutions join this journey of everyday giving to achieve our common goal of a good society, embedded in kindness to strangers.”

Victoria Vrana, Victoria Vrana, Deputy Director, Policy, Systems and Giving by All at Bill & Melinda Gates Foundation said “India has always had a rich culture of giving, and this study is an important attempt to unpack how enabling India’s everyday givers and their solution ecosystem can have a huge impact on human, economic, and social progress in the country”

Aarti Mohan, Co-founder, Head - Sattva Research said “Nearly all cultures have strong traditions of giving and caring for their communities. India, in fact has the most number of people volunteering and donating money in the world, ahead of the USA and China. Growing potential to give is evident from the expanding size and wealth of India’s middle class. We believe this is the apt time to discuss individual giving and citizen engagement in nation building, when the country is embarking on a new wave of governance post the elections of 2019”.

The event saw attendance from leading NGOs, crowdfunding channels, Internet and social media influencers, funders, policymakers and other enablers leading the charge on encouraging giving by common people in India.

About Sattva
Sattva is a social impact strategy consulting and implementation firm that works closely at the intersection of business and impact, with multiple stakeholders including non-profits, social enterprises, corporations and the social investing ecosystem. Sattva works to realise inclusive development goals across themes in emerging markets including education, skill development and livelihoods, healthcare and sanitation, digital and financial inclusion, energy access and environment, among others.

Sattva Research works on research and insights to influence decision-making and action towards social impact in the ecosystem in Asia. They have partnered with organisations such as the Gates Foundation, Confederation of Indian Industries (CII), USAID, AVPN, DFID, GIZ and Rockefeller Foundation to publish research, case studies and insights, and engages sector leaders through roundtables, conferences and impact circles.

About Bill & Melinda Gates Foundation
Guided by the belief that every life has equal value, the Bill & Melinda Gates Foundation works to help all people lead healthy, productive lives. In developing countries, it focuses on improving people’s health and giving them the chance to lift themselves out of hunger and extreme poverty. In the United States, it seeks to ensure that all people—especially those with the fewest resources—have access to the opportunities they need to succeed in school and life. Based in Seattle, the foundation is led by CEO Sue Desmond-Hellmann and co-chair William H. Gates Sr., under the direction of Bill and Melinda Gates and Warren Buffett.
Posted by editor-manu-sharma at 10:29 AM